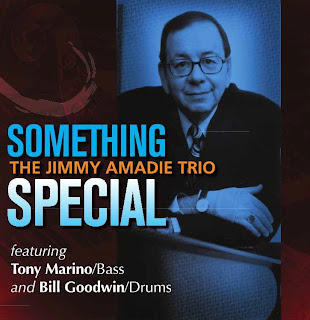 As simple and descriptive as it may seem, the title “Happy Man’s Bossa Nova” actually speaks volumes. One of two Jimmy Amadie originals contained on the pianist’s latest CD, Something Special, the tune is as joyful and celebratory as its name implies. Given the struggles and setbacks Amadie has faced on the path to recording this, his eighth album, it could easily be otherwise. But he is indeed, and indefatigably, a happy man.

Amadie’s story has been recounted often since his miraculous return to the piano bench in the mid-1990s, but it bears repeating. The North Philadelphia native was a promising young pianist in the fifties, accompanying the likes of Mel Torme, Woody Herman and Red Rodney, when his performing career was brought to an abrupt halt by severe tendonitis in both hands. Playing the piano suddenly became sheer agony, and Amadie was reduced to improvising only in his head for the next 35 years.

He managed to maintain an influential presence on jazz through those decades thanks to his own teaching (students included Kurt Rosenwinkel, John Di Martino and famed TV composer Edd Kalehoff) and the publication of two highly-regarded instructional volumes: Harmonic Foundation for Jazz and Popular Music and Jazz Improv: How To Play It and Teach It. His own belated recording debut finally arrived in 1995, thanks to a series of surgeries and his own indomitable fighting spirit, honed as a young man in the boxing ring.

That solo debut, Always With Me, was followed by a series of widely praised sessions on which Amadie was joined by legendary peers like Benny Golson, Phil Woods, Joe Lovano, Randy Brecker, Lee Konitz, and Lew Tabackin. Just as his luck seemed to be improving he was faced with a further setback. Following the 2007 recording of The Philadelphia Story, he was diagnosed with lung cancer; having reached the summit of one mountain, he suddenly found himself at the base of another.

Something Special is, in many ways, a direct result of that diagnosis. Most people are forced to reassess their priorities when confronted with a life-threatening illness; for Amadie, the cancer, which he continues to battle successfully, helped him come to the decision of recording his first trio session.

“I didn’t know if I was going to get another chance to play,” Amadie explains. “I decided to give it my best shot and play without holding back. I’m glad I did. I can’t tell you what I learned.”

There is one other trio recording in Amadie’s discography: In a Trio Setting (2002), with drummer Bill Goodwin, who returns for Something Special as he has on each of the pianist’s recordings, and bassist Steve Gilmore. But for the most part, that earlier album was produced in a very unusual way. Amadie painstakingly recorded his parts over a period of several years, as the pain in his hands allowed, and then turned the finished product over to Goodwin and Gilmore, who added their contributions during one marathon 14-hour session. Amadie was so moved by their creativity, however, that he couldn’t keep himself away from the keyboard, spontaneously laying down two more pieces in more traditional fashion.

Something Special, on the other hand, was recorded live from beginning to end, which shows in the spirited interaction of Amadie, Goodwin, and bassist Tony Merino. Nowhere is that cohesion more evident than on the classic “All the Things You Are.” The leader begins his solo with a sprightly exploration of the familiar melody, but the trio quickly takes off on a more assertive bent, adding intensity without ever sacrificing beauty.

“If I had the chance to pick any rhythm section in the world, that’s the rhythm section I’d pick,” Amadie says of his cohorts. “Bill Goodwin is one of the greatest musicians alive. His musicianship is immaculate. And Tony Merino’s playing is so robust. He can be so light and so heavy at all different tempos. Those guys make everything I do better.”

The range and individuality of Amadie’s talents are evident throughout Something Special. The blazing tempo of “Blues for Sweet Lizzy” and the percussive attack of “Get Happy” both bring out a more aggressive side of his playing, one rarely aired due to the stress it places on his hands – a factor that he never lets intrude into the studio. His tenderness emerges on “Fly Me To the Moon” and “Sweet Lorraine,” a tribute to pianist Dave McKenna whose achingly beautiful solo introduction becomes a gentle swing showcase upon the entrance of Merino and Goodwin.

“I want to do the kind of tunes that great players did,” Amadie says with regards to his choice of repertoire for the session. “You’ll hear the difference, because I don’t sound like any of them. I’ve got my own thing.”

Ultimately, it’s sharing that unique voice that drives Amadie to overcome what seem like insurmountable obstacles. He’s now looking forward to his first live performance for almost 50 years, scheduled for this spring at the Philadelphia Museum of Art. And he has new music and new collaborations always in mind.