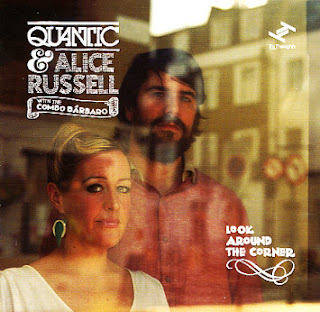 QUANTIC & ALICE RUSSELL – LOOK AROUND THE CORNER
Mindblowing stuff – maybe the deepest album we've heard so far from Quantic, and a great step forward for Alice Russell too! After years of working in some of the best contemporary funk modes around, Quantic really expands his vision here – hitting a level of maturity that brings in richer arrangements with bits of strings and other righteous touches – all in a vibe that feels just like the Cadet studios at the end of the 60s! The approach is great – because at the bottom, Quantic's still got all his sharp funky edges intact – mixed in with these swirling soulful arrangements that Charles Stepney would have been proud of – all coming together in a mode that unlocks this whole new side in Alice Russell too – a vibe that's almost Stevie Wonder-ish at times, which really fits perfectly with the grooves. Sublime sounds throughout – a true instant classic – with titles that include "Magdalena", "Here Again", "Travelling Song", "I'll Keep A Light In My Window", "Look Around The Corner", "Su Suzy", "Boogaloo 33", "Road To Islay", and "Similau". 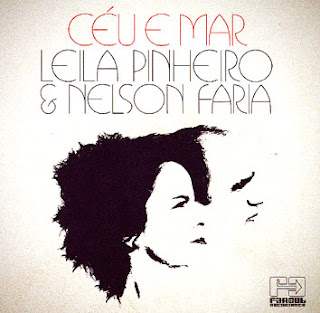 LEILA PINHEIRO & NELSON FARIA – CEU E MAR
One of the loveliest albums we've heard in years from Leila Pinheiro – a set of spare tunes recorded with only the guitar of Nelson Faria for accompaniment! The intimate setting is wonderful, and seems to bring out more feeling than usual from Pinheiro's vocals – yet also creates this sense of understatement, too – a way of never pushing things too far, and this wonderful mode of slipping into occasional wordless singing in passages of a tune – showing of a jazzy warmth that almost reminds us of Joyce at points. The stripped-down approach continues throughout the album – bringing us deeper and deeper with each track – and titles include "Cada Tempo Em Seu Lugar", "Doce Presenca", "O Amor E Chama", "Sucedeu Assim", "Bala Com Bala", "Bolero De Sata", "That Old Devil Called Love", and "Dupla Traicao". 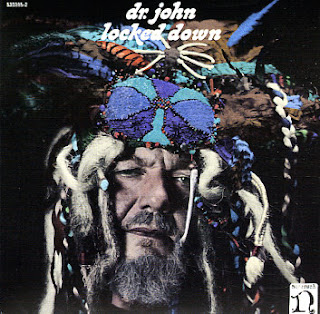 DR. JOHN – LOCKED DOWN
The best records in years – maybe decades – from the legendary Dr John – and a set that stands up strongly next to the messed-up Crescent City vibe of his 70s classics! Big thanks are due to Black Keys' guitarist Dan Auerbach – who produced and supervised the whole recording – and helped create the kind of rootsy studio proceedings that make for just the right vibe to help the Doctor hit all his best classic modes! Leon Michels brings in some great keyboards, too – and an undercurrent of El Michels funk – and Dr John's vocals really sparkle in the setting – stepping out with all the weird raspy elements we love so much. Titles include "Ice Age", "Getaway", "Kingdom Of Izzness", "You Lie", "Eleggua", "My Children My Angels", "Locked Down", and "Big Shot".
~ Dusty Groove
Posted by Jazz Chill at 8:58 AM