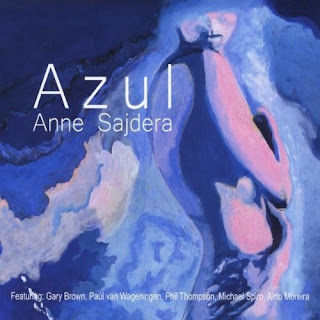 Pianist/composer Anne Sajdera has long been an invaluable part of the San Francisco Bay Area Brazilian music scene—as leader of her own band Pelo Mar and member of ensembles such as Rio Thing and the award-winning Bat Makumba. Her much-anticipated debut Azul, which will be released April 17 by her label, Bijuri Records, highlights her exquisite touch, rhythmic acuity, and melodic resourcefulness front and center.

Sajdera (sazh-dair-uh), who co-produced the CD with veteran guitarist/composer Ray Obiedo, utilizes her dynamic trio of Gary Brown on bass and drummer Paul van Wageningen, with percussion added on most tracks. “Every artist is different, but in order to make my first album in the right way, I needed to have the right people around me,” says the pianist. “It’s taken this long to find those people. It was the perfect time.”

Percussion on Azul is handled alternately by Airto Moreira and Michael Spiro, with drummer Phil Thompson taking over for van Wageningen on two selections. “I always knew I wanted percussion on the album probably because when I think musically, I’m always thinking from the perspective of the rhythm section,” says Sajdera. “I have deep reverence for Airto and feel so fortunate that he wanted to participate in this recording. He never looks back when he’s working. Mike Spiro wasn’t that different. He treats recording like painting.”

Obiedo was struck by Sajdera’s “focus and conscientiousness about every aspect of the production. Her choice of tunes, both her original compositions and the Brazilian and jazz standards, and her beautiful arrangements made this project such an enjoyable experience for me.” In addition to Sajdera’s sophisticated, lyrical originals, the repertoire includes compositions by Egberto Gismonti (“Frevo”), Chico Pinheiro (“Tema em 3”), Ivan Lins (“Love Dance”), and Wayne Shorter (“Ana Maria”), as well as a dramatically reharmonized version of “I Should Care.”

Born in 1965 in Portsmouth, Virginia to a military family, Anne Sajdera grew up in San Diego. In 1985 she moved north and enrolled in the San Francisco Conservatory of Music as a performance major, graduating as a composition major. She focused on 20th-century repertoire and immersed herself in Stravinsky, Prokofiev, and Bartók while performing as pianist for the Conservatory Orchestra, which gave her exceptional opportunities like performing a selection from John Adams’s opera "Nixon in China" conducted by the composer at SFCM’s 75th-anniversary concert in Davies Symphony Hall.

Sajdera began investigating jazz and then—via a class with Marcos Silva at the Jazzschool—Brazilian music. She gigged extensively around the Bay Area with her band Pelo Mar and was an original member of Bat Makumba, with whom she performed at the city’s huge Mission District Carnaval festivities. Recently she has been working with Latin-jazz singer-songwriter Alexa Weber Morales.

The pianist also developed an interest in classical Hindustani music, sparked by a two-month stay in India in 1999. She has since continued to cultivate this facet of her musical vision through study with India’s foremost violinist and vocalist, Kala Ramnath.

The music for Azul emerged after a two-year stretch (2006-2008) when Sajdera was off the scene recuperating from a back injury, a period when she was “writing tunes, practicing, setting up grooves, trying to really expand my linear playing. I studied a lot and went back to original sources like Herbie Hancock, Keith Jarrett, Monty Alexander, and Egberto Gismonti.”

Anne Sajdera will celebrate the release of Azul with a special concert on Sunday, April 22, 4:00 pm, at the Piedmont Piano Company in Oakland, with bassist Gary Brown, drummer Celso Alberti, and percussionist Brian Rice. The CD is available at iTunes and CD Baby.
Posted by Jazz Chill at 12:28 PM