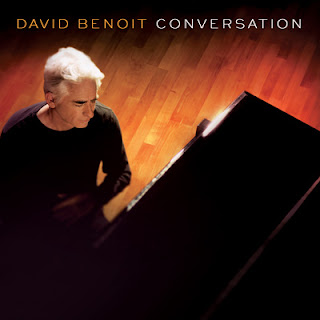 Pianist and composer David Benoit has something to say. It’s clear from his multi-dimensional body of work across three-and-a-half decades, and his deep jazz roots that still allow room for forays into classical, Latin, pop, world music and a range of other sounds. The connections and associations he has made along the way have resulted in a fascinating and ongoing interplay between musics, musicians and musical philosophies. Simply put, Benoit is engaged in a conversation – a dynamic and ongoing act of communication that results in a sound that’s consistently engaging and entertaining.

Benoit takes the discussion to a new level of creative exchange on Conversation, his new album set for release on May 29, 2012, on Heads Up International, a division of Concord Music Group.

“When I started making records, I never conformed to a specific format,” says Benoit, whose recording career began with the release of Heavier Than Yesterday in 1977. “Mostly my records were just me writing and playing my own music, directly from my heart. I’ve come back to that on this record, but using some orchestral colors this time. As a composer, I’ve stretched a bit, and this really represents where I am right now as a pianist, as a musician, as a composer. It’s a very good snapshot for people who have been following me for a while. This is where I am right now. I’m not pandering to radio. I’m just doing what I love to do, and that’s what’s been so much fun about it.”

“As a writer, I really wanted to dig deep on this and try some things with people who weren’t afraid to try them with me. It’s actually one of the most fun and relaxed records I’ve made in at least a couple years. It was just nice to not have any kind of agenda. The title of the album really sums it up. There’s a lot of conversation going on with this record.”

The discussion starts with the sweeping and cinematic “Napa Crossroads Overture,” a track co-authored a couple years ago by Benoit and David Pack, GRAMMY Award winning co-founder, guitarist and main vocalist for the band Ambrosia, who appears on this version. “I knew it would fit perfectly on this record,” says Benoit. “It’s reminiscent of the lush, orchestrated sound of some of my earlier recordings, and it was a lot of fun to revisit that sound.”

Further in, Benoit has some fun with “Diary of a Wimpy Kid,” the rollicking, Vince Guaraldi-esque theme music composed by Theodore Shapiro for the 2010 movie of the same name. Benoit gets assistance on this track from his 11-year-old daughter June, a up-and-coming (but by no means wimpy) violin student. “Our engineer brought his rig to my house, and we recorded it right in my living room so June could play on the last verse,” he says. “I made sure Jeff Golub put in a crunchy guitar solo to add another layer of fun to it.”

The quieter and much more melodic “Sunrise on Mansion Row” is one of Benoit’s favorites in the entire set, “and one of the few that I wrote just sitting at the Steinway,” he says. “I wanted to get a little bit of that French sound into it, as a nod to influences like Debussy and Ravel. We brought in a string quartet, with a cello player who plays a really nice line. The song represents where I am as a composer right now. I’m writing some pretty stuff, but trying to make it interesting and evocative, too.”

The swaggering “Let’s Get Ready” features a compelling sax solo from David Sills in the 12-bar blues section. “The title helps define the track,” says Benoit. “It’s a prelude to something else. It’s more of a traditional jazz piece, designed to flow right into the more adventuresome closing track.”

And that closer is the title track, “Conversation,” which is actually the third and last movement in a suite that Benoit wrote several years ago called Music for Two Trios. “I hired Robert Theis, who won the International Prokofiev Piano Competition in 1995, to play on it,” says Benoit. “It’s the first time I didn’t play all the piano parts on my own record. It’s a conversation between classical and jazz, between a melodic pianist like Robert and a blazing guitarist like Jeff Golub. That’s really what this song and the entire record are about – conversations between musicians coming from different realms and finding common ground.”

The discussion may be intense and filled with many voices, but the overriding message remains simple. “My primary goal on this recording – just as it is on nearly all of my recordings – is for people to come away from it feeling good,” says Benoit. “Or maybe it will take them to a place they’ve never been. Maybe they’ll feel something a little bit deeper than they might feel with other CDs, or maybe they’ll want to put it on and have a cocktail and dance the bossa nova. In the end, I want them to take away whatever they want to take away. The main thing is that they enjoy it, and they experience a little bit of what I experienced making it.”
Posted by Jazz Chill at 10:59 AM