KENNY GARRETT - SEEDS FROM THE UNDERGROUND 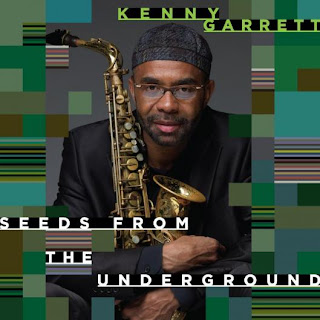 Over the course of a stellar career that has spanned more than 30 years, saxophonist Kenny Garrett has become the preeminent alto saxophonist of his generation. From his first gig with the Duke Ellington Orchestra (led by Mercer Ellington) through his time spent with musicians such as Freddie Hubbard, Woody Shaw, Art Blakey & The Jazz Messengers and Miles Davis, Garrett has always brought a vigorous yet melodic, and truly distinctive, alto saxophone sound to each musical situation. As a bandleader for the last two decades, he has also continually grown as a composer. With his latest recording (and second for Mack Avenue Records), Seeds From The Underground, Garrett has given notice that these qualities have not only become more impressive, but have provided him with the platform to expand his horizons and communicate his musical vision clearly. Seeds From The Underground is a powerful return to the straight-ahead, acoustic and propulsive quartet format that showcases Garrett's extraordinary abilities.

For Garrett, Seeds From The Underground is a special recording. It once again consists of all original compositions, and is truly an homage to those who have inspired and influenced him, both personally and musically. "All of these songs are dedicated to someone," says Garrett. "And the 'seeds' have been planted, directly or indirectly, by people who have been instrumental in my development."

With Seeds From The Underground Garrett has crafted a project that offers his appreciation while always making the listener aware of his band's skillful approach to melody, harmony and rhythm. From personal nods such as the opening track "Boogety Boogety," dedicated to his memory of watching western films with his father (the title refers to the sound of a galloping horse); "Wiggins," which references his high school band director Bill Wiggins; and "Detroit," an evocative, reflective composition about his hometown, and a celebration of mentor Marcus Belgrave; to his appreciation of some of his musical heroes on "J Mac" (Jackie McLean); "Haynes Here" (Roy Haynes); and "Do Wo Mo" (Duke Ellington, Woody Shaw and Thelonious Monk).

Melody, as a matter of fact, was a key element for the saxophonist when writing for the recording. "I wanted to focus on the melody," Garrett reflects. "I want people to remember what the melody is before we start improvising...and on some songs I heard voices, the singing of the melody." This latter point is in evidence on the selections "Haynes Here," "Detroit" and "Welcome Earth Song."

Another notable component compositionally for Garrett on Seeds From The Underground is his approach to rhythm and meter. Over the past few years, one of the most popular and acclaimed groups that he has been a part of is the GRAMMY® award winning Five Peace Band, joining guitarist John McLaughlin, pianist Chick Corea, bassist Christian McBride, and drummers Vinnie Colaiuta and Brian Blade. His participation in that band led him to experiment with writing in different meters. "Some of these songs are in odd meters; in my experience with John, we played some songs in odd meters, so I thought, this is a different way of writing songs," Garrett states. "So there is some of that approach here."

Garrett's current working band is very much up to the task on Seeds From The Underground. And like all successful bandleaders, Garrett knows what he wants musically and has formed a band that will best communicate his message (with implicit trust among one another). Bassist Nat Reeves is a rhythmic anchor and a long-standing member of Garrett's past aggregations. However, for this recording, Garrett thought a lot about the talents of fellow Detroiter, drummer Ronald Bruner, as well as Venezuelan pianist Benito Gonzalez. "When I decided I wanted to do the album, I had Ronald in mind; I thought that he would work well on these songs. And Benito has been in my band for a while, and we talked conceptually about how I hear the piano in the band. McCoy Tyner is my man, so I wanted to have more of that sound, and there aren't a lot of young guys around who are dealing with that like Benito is." Percussionist Rudy Bird also provides a driving, rhythmic pulse to the recording.

A very important contributor to Seeds From The Underground is the project's co-producer: pianist, composer and educator, Donald Brown. His friendship with Garrett goes back to their days with Art Blakey & The Jazz Messengers. He has been an integral part of past Garrett recordings, and has been a musical inspiration for him. "I feel comfortable in the studio with him and I know he's going to hear what I hear, because we think alike in how we hear music," states Garrett. "I've also always admired his compositions and he was really inspired by these compositions, so he was glad that we were able to hook back up on this project."

Garrett has always expressed interest in music from other parts of the world. Whether it's Africa, Greece, Indonesia, China or Guadeloupe, he immerses himself in the culture and gleans from his experience something that becomes a part of his artistic message. On Seeds From The Underground, the African-influenced "Welcome Earth Song" and "Laviso, I Bon?" (the latter was inspired by a musician friend in Guadeloupe) are prime examples.

The album highlights Garrett's overall approach to music: wide-ranging, receiving ideas from all musical sources and genres. Garrett states, "I love the challenge of trying to stay open...about music and about life. If it's music, I just try to check it out. Right now I'm listening to some music from Martinique and I'm lovin' it. If I like it, maybe I can incorporate some of it into what I do." As for composing: "I don't try to control what I write," he says. "Music comes from 'The Creator.' It's a gift that's coming in, and I receive it. I write in all genres, and I'm writing all the time. It's never about what it is...I just say thank you."

Seeds From The Underground is the latest stop on what continues to be a fascinating musical journey for Kenny Garrett and his listeners. It's a recording that is not only a significant personal statement from the saxophonist, but a musical declaration of his continued growth as a musician, and in particular, as a composer.
"Since my last recording, [his Mack Avenue debut, Sketches Of MD/Live At The Iridium, I've had a lot of different experiences [including the aforementioned Five Peace Band, as well as The Freedom Band featuring Corea, McBride and Haynes]," Garrett reflects. "What I liked about putting this album together was the idea that my writing had grown and had become a little different, partially the result of Seeds From The Underground." ~ Mack Avenue Records