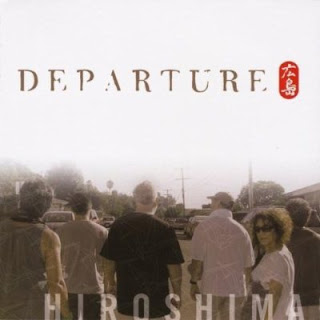 Hiroshima have released their latest album, Departure, the follow-up to their 2010 Grammy-nominated Legacy CD. Co-founder and leader of the band, Dan Kuramoto has stated, “After more than 30 years in the recording industry -- and almost 4 million records sold we’ve decided to leave record companies behind and venture on our own. “It is a new beginning for us in many ways. This actually is something that many other artists are now doing since they all now have the ability to self-market themselves with distribution through various website. Having said that, Departure is a journey of nine songs -- all originals with just one guest artist, the incredible harmonica player Tetsuya “Tex” Nakamura

Here are some of the album highlights:

The opening track “Have You Ever Wondered,” is a luscious, textured piece featuring Nakamura and June’s shimmering koto.

“Koto Cruise,” is the second song and features a funky groove and a burning koto solo, “Blues for Sendai,” a soulful jazz blues piece, is dedicated to the spirit of the Japanese people who are rebuilding after the tragedies of March, 2011.

The rockin’ blues in “Smiling Jack,” recalls the music of the 80’s and features the roaring B3 organ playing of Kimo Cornwell.

The sensual soul of “See You Again,” is a tribute to our friend and mentor James Moody. If you listen closely you’ll hear “Moody’s Mood for Love.”

After many years of requests, we offer our first live taiko recording, “Yamasong Duet” - - capturing the voice and the thunder of Shoji’s taiko and Danny’s fierce percussion interplay.

The power and spirit of “First Nation,” a composition by the Hawaiian Kimo Cornwell, is a song embracing many native cultures - - and some serious jazz.

Departure ends with two new visitations to our most popular songs, “Thousand Cranes,” and a soulful version of “One Wish,” done as an acoustic trio.”

“Also on our website at hiroshimamusic.com we ask you to join the Hiroshima community. By signing up and giving us your email addresses we will provide information about the band, special discounts, free music, and an interactive network of arts, culture and lifestyles.