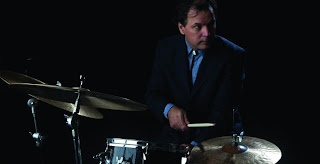 As a follow up to 2009's Courageous Hearts, his ingenious melding of Afro-Cuban, Brazilian, New Orleans second line and straight ahead swing rhythms, drummer-composer-bandleader Towner Galaher follows a different muse on the aptly-named Uptown!, his paean to Hammond B-3 organ groups that played at places like Small's Paradise in Harlem during the '50s and '60s. "It runs between all the usual suspects like Jimmy Smith, Jack McDuff and Lonnie Smith, but there's also an element of Larry Young in there too," says Galaher. "With an organ record people right off the bat think guitar, but this album has a different twist because it's organ plus three horns."

Joining Galaher on his third outing as a leader is the impressive frontline of GRAMMY® winning trumpeter Brian Lynch, alto saxophonist Donald Harrison (Lynch's former band mate in both Art Blakey's Jazz Messengers and Eddie Palmieri's band) and tenor saxophonist extraordinaire Craig Handy. Handling the organ is Pat Bianchi, a B-3 burner who has played with such guitar greats as Pat Martino, Ed Cherry and Corey Christiansen and is a key member of drummer Ralph Peterson's Unity Project, his Larry Young tribute band.

Galaher drives them through a varied program that opens with Frank Foster's swinging waltz-time vehicle "Simone" and closes with the leader's modernist burner "Say What?," which includes torrid solos by each of the horn players and has Bianchi pushing the harmonic envelope into Larry Young territory. Galaher reveals some graceful brushwork and a mean shuffle groove on Wayne Shorter's "Tell It Like It Is" (from the Jazz Messengers' 1961 album The Freedom Rider), which has Harrison quoting from "It Ain't Necessarily So" during his solo, Lynch playing with a mute on his solo and Handy nearly walking the bar on his robust tenor solo. They turn in faithful interpretations of Shorter's pensive ballad "House of Jade" and McCoy Tyner's "Blues on the Corner" (from 1965's The Real McCoy) on which Galaher cleverly interpolates a segment of the melodic theme to "Resolution" from John Coltrane's iconic A Love Supreme.

Galaher and his all-star crew show some old school swagger on his post-boppish title track and on Mike Clark's earthy Texas shuffle, "Shuffleocity," which has Bianchi digging deep into his Jimmy Smith-Jack McDuff bag. The leader also showcases his compositional chops on his 6/4 Latin-tinged "Café Con Samba," his urgently swinging "East 104th Street Waltz," the dark groover "Phantom City" and the extremely syncopated funk of "Jimmy and Johnny," named for his youthful band mates from Portland, Oregon, the Sanders brothers. "Jimmy was really an A-1 organist and kind of a local legend," recalls Galaher. "My first taste of playing with a B-3 was with him."

One listen to Uptown! and it's easy to see why drum master Lenny White calls Galaher "a triple threat - great drummer, great composer, great bandleader," or why modern jazz-funk innovator Mike Clark praises Towner for his "unquenchable desire to know all there is about music...and to play the kind of jazz that is informed by the masters of the past while pointing to the future." Surrounded by such seasoned vets and stellar soloists as Lynch, Harrison, Handy and Bianchi, Galaher makes his most striking statement to date on this potent outing.

Born in Portland, Oregon in 1955, Galaher picked up drums at age nine and was dedicated at an early age. "I went to an alternative high school so I got to practice drums like five or six hours a day all through high school, which was a good thing for me," he recalls. "And I went straight from high school into the club scene and I continued playing there for the next 11 years, playing the whole gamut of gigs. I was in a nine-piece rhythm and blues band with horns that did original music along with all the old Motown stuff and more modern Earth Wind & Fire, Tower of Power stuff."

His Portland drumming mentor was Mel Brown, who played jazz in between tours with his two main gigs, The Temptations and The Supremes. Galaher's long career in education began in 1980 at Brown's Drum Shop, and has since developed into over 30 years of teaching at community centers, giving private lessons from music stores and his home studio, and more than 14 years in New York City Public Schools. Now a New York resident, Galaher has garnered much respect as an educator who is committed to mentoring and passing the baton to younger generations. It was in a local school that jazz drumming great Art Blakey helped encourage Galaher to move to New York City. "Art was at a high school in town giving a concert and lecture. And he was saying something about, 'You should get all the experience you can and then come to New York, where all the action is.' And that was kind of an affirmation of where I was headed anyhow."

Towner finally made the move to the Big Apple in the Fall of 1986 and signed up for a 10-week certified program at the Drummer's Collective, where he met and began studying with Headhunters drummer Mike Clark. "I made a really great connection with him right off the bat and that really fortified the trajectory of my musical direction in jazz." He subsequently studied Afro-Cuban drumming with Frankie Malabe, Brazilian drumming with Duduka da Foncesa and New Orleans drumming with Ricky Sebastian. Galaher organically blended all of those diverse rhythmic elements on his 2007 debut as a leader, Panorama, and followed up with an equally impressive display on 2009's Courageous Hearts. Now he makes an incremental leap to a new level with Uptown!.

"Being a composer is a big part of what I am, although it was very unintentional," says Galaher. "I worked relentlessly at honing my drumming skills but I never really made any conscious effort or decision toward developing into a composer. When I got into Queens College and started taking arranging and composition courses with Roland Hanna and Michael Mossman, that's what set everything in motion. It completely changed my life and opened up another dimension of creativity. I was writing material and doing all the arrangements myself as well. So I came up with the songs for the first album, and then I just kept going."

"I have continued to grow and develop each decade," he continues. "I'm proud that even within the last 20 years or so I've improved dramatically over where I was. Now I'm building up a catalog with this third release and I've already written material for the next one."

Meanwhile, check what Galaher and his kindred crew are putting down on Uptown!