ARTURO SANDOVAL DEAR DIZ (EVERY DAY I THINK OF YOU) 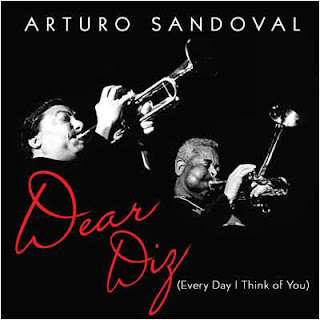 On May 8th, Arturo Sandoval will release his second album on Concord Jazz, Dear Diz (Every Day I Think of You). Dear Diz (Every Day I Think of You) is Sandoval’s tribute to Dizzy Gillespie, the mentor and friend who literally rescued him and his family from an oppressive existence and gave them a chance at an entirely new and better life. The album is a collection of classics from Gillespie’s massive body of work, each framed in big-band arrangements that throw the spotlight squarely on the elements of bebop that underscore so much of the iconic trumpeter’s work and set the tone for the music of his era.

Backing Sandoval on the project is a crew of top-shelf jazz artists: vibraphonist Gary Burton, Yellowjacket's leader saxophonist Bob Mintzer, organist Joey DeFrancesco, clarinetist Eddie Daniels, saxophonist Ed Calle, drummer/co-producer Gregg Field and several others. Also along for the ride are a couple of unlikely but well-placed surprises – actors Andy Garcia on percussion and vocalist Manolo Gimenez. The resulting set is, as Field puts it, is Sandoval’s “love letter to an old friend.”

The set opens with Gillespie’s voice, introducing a young Arturo Sandoval as “one of the young grand masters of the trumpet” during a live performance in the late ‘80s. What follows is a contemporary re-construction of Gillespie's signature “Bebop,” arranged by 2012 Grammy-winner Gordon Goodwin. Goodwin, whom Field calls “The most interesting voice in contemporary big band writing,” is also responsible for the fiery arrangement of “Salt Peanuts!,” which features Bob Mintzer on tenor sax, Gary Burton on vibes and if you listen closely you'll hear Sandoval friend Joe Pesci joining in the band vocal. “This is such a perfect example of Gordon’s genius,” says Field, “of his ability to take something that is so familiar to jazz musicians and fans and completely rework it.”

“Con Alma,” arranged by Grammy-winner Nan Schwartz, includes a classical-string quartet arrangement that’s a very beautiful thing,” says Sandoval. “This tune has been recorded many times, but I don’t think it’s been recorded quite this way before. The string quartet gives the song such a fine, elegant sound.”

The exotic and impassioned “Tin Tin Deo” features vocalist Manolo Gimenez , supported by Mintzer on tenor sax, by actor Andy Garcia on percussion, Wally Minko on piano and Joey DeFrancesco on organ – all carefully balanced in an arrangement by Dan Higgins. The album closes with an eleventh track, “Every Day I Think of You” a poignant, string-infused ballad by Sandoval that serves as the coda to this heartfelt tribute recording. Propelled by Sandoval’s stirring vocals, the track veers completely away from the big band vibe that precedes it, opting instead for something much more intimate, understated and personal. “I really mean every word of that song,” says Sandoval. “Dizzy encouraged me so much. He opened so many doors for me and showed me so many opportunities that I would not have had otherwise.”

At the heart of Dear Diz (Every Day I Think of You) is the bebop groove that Gillespie spent a lifetime exploring and refining, says Sandoval. “When it comes to bebop, you either know it or you don’t,” he says. “There’s no halfway. If you’re going to be a good bebop player, you really need to be a hell of a musician with a lot of skill and a great education and a great command of your instrument. This is what Dizzy was all about. He wasn’t just a trumpet player. He was an innovator and a creator. That sense of innovation and creativity that he brought to every note he played is what inspires this recording and everyone who plays on it. In that sense, he’s still very much with all of us. I do think of Dizzy every day.”

ENCORE
11. Every Day I Think Of You featuring Arturo Sandoval, vocal
Posted by Jazz Chill at 9:25 AM