BRIA SKONBERG - SO IS THE DAY 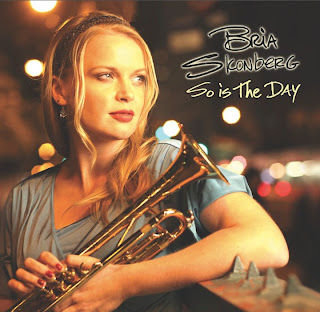 Less than two years ago, trumpeter-vocalist-composer-bandleader Bria Skonberg uprooted from Western Canada and arrived in New York City. Lured by the music and those who play it so well, the already-seasoned musician hoped to thrive and to learn in the jazz mecca. The city landscape and abundance of clubs proved to be a stark contrast to the hobby farm Skonberg was raised on in Chilliwack, British Columbia, but the young musician dove in head-first, ready to make an impact with her unique, modern take on the traditional jazz and hot swing the scene was built on. Soon, in the spring of 2011, she found herself performing a highly successful first solo concert at New York's renowned Symphony Space for the Sidney Bechet Society. During the performance, Skonberg announced that one of her resolutions for the year was to record a new album of mostly original material. With nine freshly-minted originals and three equally intriguing interpretations of well-known pieces, So Is The Day, her debut for Random Act Records, is that album.

Joining Skonberg in the frontline are two of her staunchest supporters: saxophonist, clarinetist and flautist Victor Goines, and trombonist Wycliffe Gordon (who has employed Skonberg in the brass section of his big band and small ensembles on several occasions). The rhythm section features pianist Jeff Lashway, guitarist Randy Johnston, bassist Kelly Friesen, and drummer Ulysses Owens Jr., joined by percussionist Roland Guerrero on several tracks; special guests include trombonist Michael Dease (on "Gymnopedie") and John Pizzarelli, who sings and plays with Skonberg on "I Wish I Hadn't Forgotten." Scott Elias (Random Act Records Founder/President and So Is The Day's producer), also plays organ on the upbeat "Penny In Your Pocket."

Elias was introduced to Skonberg through Lashway, whose Reunion album was Random Act Records' debut release in 2009 (the same year Skonberg released her independently produced debut, Fresh). Lashway performed at a festival in Idaho where Skonberg also happened to be playing, called Elias and told him, "Bria Skonberg should be your next artist-she has it all."

Soon after, Elias and his wife Anna (also his business partner) went to see Skonberg play at the Suncoast Jazz Festival in Florida. "Of course, she rocked the room; they had the crowd dancing. We were thoroughly impressed," remembers the producer.
So Is The Day, releasing on April 10, features nine of Skonberg's own ingenious originals, plus three familiar melodies. The album kicks off with "Keep Me In The Back Of Your Mind," giving us our first taste of Skonberg's tangy-toned trumpet, as well as her compelling vocal style. "Keep Me" also features some inspired growling from Gordon.
The title track is one of the musician's signature achievements as a composer-bandleader thus far, a wailing, bluesy number that's equal parts New Orleans and early Duke Ellington; it features a soulful clarinet solo from Goines. The influence of New Orleans is also clearly evident on "Chilliwack Cheer." The track is a traditional Crescent City style anthem for marching and partying, featuring Skonberg's rapturous trumpet, as well as prominent participation from the boisterous tandem of Goines and Gordon.

Inspired by her father's hockey-playing hobby, "Hip Check" is a funky hard-bop style vamp (complete with a big toned tenor solo from Goines) that could have been played by Art Blakey's Jazz Messengers. Its odd-metered groove amply complements the quirky melody.

"Far Away" best exemplifies the leader's more contemporary songwriting skills. As with the best tunes, a seemingly autobiographical story is displayed here. A tale of longing and the challenges of a long-distance relationship is a universal hurt to which most would-be couples (and perhaps all road-weary musicians) can easily relate.

"Penny in Your Pocket" and "I Wish I Hadn't Forgotten" are quite possibly Skonberg's most charming originals on the album. The latter recalls the snappy swing numbers of the 1940s, a mood that is perfectly realized by the composer, both in solo and together with Pizzarelli's voice and guitar. "Have A Little Heart" is her most notable contemporary sounding ballad, and though it's somewhat slow, the mood is essentially optimistic and far from a torch song. It gives us a welcome solo by Skonberg on flugelhorn, in addition to her heartfelt singing.

The album introduces three new interpretations of others' tunes, including Erik Satie's classical piece "Gymnopedie", interpreted here in an Afro-Cuban vibe; Irving Berlin's tune written for Ginger Rogers, "Let Yourself Go", now a funked up groove; and Joni Mitchell's classic, "Big Yellow Taxi", which is phrased over pan-American polyrhythms, and made vital by Skonberg's percussive, staccato phrasing on both flugelhorn and vocals.

"My Friend" is a suitable closer, a standout feature for the composer-trumpeter's singing, a highly emotive, traditional-style spiritual that spotlights her solo voice as accompanied only by pianist Lashway.

Originally from Chilliwack, British Columbia, Skonberg comes from a musical family in which everyone played an instrument. "My parents were teachers but thought it would be a cool experience to raise cows and chickens along with three kids," she remembers, "so we always had chores to do on our two-acre hobby farm. My surrounding neighbors owned farms, so we had lots of space to run around and make lots of noise, which is good when you're learning the trumpet."
Encouraged by her father to study the instrument, she also learned to play and compose music on the piano, and sing. Her first influences on the trumpet included Louis Armstrong, Kenny Ball, and Nicholas Payton - all of whom she listened to for their expertise in the swing and traditional jazz styles. "My first real trumpet mentor was Simon Stribling who's an incredible Australian jazz/life enthusiast now in Whistler, BC. He opened my ears to players like Roy Eldridge, Jabbo Smith, Red Allen, lots of Louis and more when I was 17. He still inspires me."

Skonberg was also drawn to this music because Chilliwack was home to an annual trad festival, for which bands and soloists flew in from all over the world. The Vancouver Dixieland Jazz Society sponsored her attendance at the Mammoth Lakes Jazz Camp. "That changed my life - I really fell in love with the whole culture," states Skonberg. "I'm now a full faculty member at the annual student and adult Sacramento Traditional Jazz Camps." Her first paid gig was as a singer, with the Moonlighters Big Band from Abbotsford. Bria was 16 at the time (most band members were 30-40 years older), and she proved her worth to the orchestra by doubling on trumpet, as well.

She auditioned for and was accepted by Capilano University in Vancouver, and upon graduating Skonberg worked and recorded regularly with her own groups The Big Bang Jazz Band, which grew out of her high school in Chilliwack, Bria's Hot Five which was dedicated to the music of Louis Armstrong and the swing dance scene, and the Mighty Aphrodite Jazz Band that she co-founded in 2004. Comprised entirely of young women from the West Coast of the USA and Canada, they have played all over the states and have released four albums. From 2006-2010 she honed her show chops as a featured soloist in the big band of Canadian icon Dal Richards. Her career grew exponentially when she moved to New York City. Even though it's a city that is hardly bereft of trumpet players, almost immediately she found herself studying with legendary brass star Warren Vache and playing in the big band of Nicholas Payton.
Now, as an 18-month veteran of the competitive New York scene, and with her forthcoming U.S. debut, So Is The Day, Skonberg is prime to position herself as one of the most versatile and imposing musicians of her generation. "Bria Skonberg brings the great tradition of Louis Armstrong into the 21st Century," says Elias. "Her songwriting is intelligent and touching, her trumpet playing is swinging and sublime, her voice is angelic and heartfelt. Her beauty is rare and shines from the inside out."
SoBar Entertainment Presents:
Bria Skonberg So Is The Day Album Release Performance @ The Iridium
with special guest Warren Vaché
Tuesday, April 24 - sets at 8pm & 10pm
1650 Broadway, New York, NY 10019
Phone: (212)582-2121