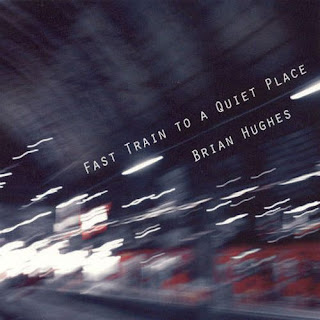 True to the title of his eighth and latest solo recording Fast Train To A Quiet Place, Brian Hughes at last carved enough time away from his whirlwind live performance schedule to dedicate himself to his first studio recording since 2003’s Along The Way. The benefits of recording and traveling the world with his fellow Canadian Loreena McKennitt for 24 years – the last 20 while also developing his own career as a chart topping contemporary jazz guitarist – are clear from the get go on the explosive ten track collection. Driven by the multiple award winning composer and guitarist’s trademark electric guitar contemporary jazz vibe, the set also incorporates elements of blues, gospel, Latin, Brazilian, flamenco, tropical and Eastern Indian Music.

He’s chronicled these for his fans on two recent live performance projects, Live (2007) and the DVD No Reservations (2010). The train gets rolling with the bustling and percussive, stop and start motion that drives the opening track and first single “Fast Train,” which builds slowly towards a blistering, hypnotic crescendo. The sensual and dreamy “Blanket of Stars” was inspired by Hughes walking out of the studio looking up at the sky on a perfect night in his hometown of Altadena, California. The quirky working title of “Would You Like Fries With That My Dear?” somehow stuck to a sizzling track that spins bossa nova into such frenzy that Hughes began to call the vibe “Rockanova.” After the blues tinged tropical romance of “You & I,” Hughes ventures into spy movie territory with the cool and bluesy, samba/boogaloo piece “Gotcha.” Rodhe brings out the classic soul-jazz via the Hammond B-3 on the funked out “Super Tight,” which features Hughes’ bright, blistering electric guitar.

The inspiration for the title of the acoustic driven flamenco jam “Café Sin Nombre” is the place in Sevilla where flamenco is supposed to have originated. Fast Train To A Quiet Place wraps with a three songs with roots in very different places. Following an exotic venture to India via a romp on the electric sitar on the moody, atmospheric “The Gift,” Hughes goes “To A Quiet Place” with a graceful interlude on the bouzouki. He then heads back home—down home—for a fiery, anthemic electric guitar driven gospel explosion appropriately named “Hallelujah.”

While concurrently building a following via his work as a co-producer and musical director for fellow Canadian Loreena McKennitt, Brian Hughes has carved out an impressive career in the contemporary jazz arena. His first two albums, Between Dusk and Dreaming (1991) and Under One Sky (1992), established him as one of the rhythmically progressive guitarists and composers in the genre, perfectly blending his fluid and emotive guitar style into an exciting, melodic mix of Latin, Jazz and World Music compositions.

After being chosen as a winner in JAZZIZ Magazine’s “Guitars On Fire” competition in the early 90s, his subsequent recordings Straight To You (1996), One 2 One (1998), Shakinʼ Not Stirred, Along the Way, Live and the concert DVD No Reservations have received critical acclaim and major radio air play in the U.S. and Canada. His sizzling fretwork and infectious compositions have received great critical acclaim that is perfectly reflected in one journalist’s assessment that Hughes is “both a great artist and an accessible one. His passion is so obvious, intense and contagious, that his audience shares it.”

“I chose the title Fast Train To A Quiet Place,” he says, “because the new album is another journey oriented recording for me, drawing influences from many different cultures and featuring songs that I’ve written over the past few years. It’s a very personal project and all the songs have a specific meaning — each one a snapshot of a moment in time and which collectively represent where I am in my life now personally and creatively.”
Posted by Jazz Chill at 8:17 PM