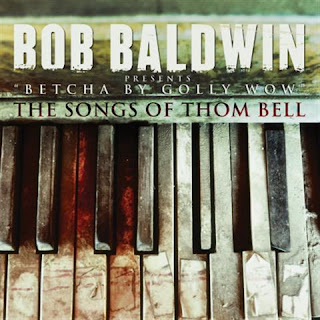 A passionate homage to one of the architects of the classic “Sound of Philadelphia” that revolutionized the soul of R&B music, the 10-track collection on Peak Records (distributed by eOne Entertainment) also reflects the grooving, multi-cultural vibe the keyboardist, composer and musical innovator has trademarked as “New Urban Jazz.” Baldwin co-produced many of the tracks with famed songwriter and producer Preston Glass, whose extensive resume includes Whitney Houston, Kenny G, Stanley Jordan, George Benson and Aretha Franklin.

Over 35 years since the heyday of Philly soul, its sweet vibes, colorful textures and infectious grooves continue to enchant fans of many generations and artists and musicians from a multitude of genres. Bell left an indelible legacy of his own on the era via classic hits by The Spinners, The Stylistics, The Delfonics and others—many co-written with the late lyricist Linda Creed. Throughout his 15 previous recordings—which range from his 1990 major label debut Rejoice and a celebration of The American Spirit (2002) to Brazil Chill (2004) and two recent collections redefining urban instrumental music as “New Urban Jazz”—Baldwin has touched on a few gems from Bell’s rich catalog.

On Betcha By Golly Wow, he re-imagines “People Make The World Go Round” (originally recorded on Cool Breeze (1997) to reflect the unique production approach Baldwin takes to these nine Bell classics and two originals inspired by his vibe, the old school easy funk flavored “Gonna Be Sweeter” and the lush, elegant tribute “Bell and Creed.” Baldwin’s most notable previous Bell reworking was “Break Up To Make Up,” a track from singer Will Downing’s 1993 collection Love’s The Place To Be featuring Baldwin and saxophonist Gerald Albright. The keyboardist felt that the original track was so in the spirit of Betcha By Golly Wow that he includes the 1993 recording untouched on the new collection.

As the “Quincy Jones” of the project, Baldwin features two artists from the Peak Records roster: guitarist Russ Freeman (who adds punch to a sensual, easy shuffling version of The Delfonics’ “Didn’t I (Blow Your Mind This Time)”; and Paul Taylor, whose whimsical soprano blends beautifully with Baldwin’s piano and Ragan Whiteside’s backing vocals on The Stylistics’ “You’re As Right As Rain”. Guitarist Paul Brown adds a crackling cool to the ambient soul-jazz spin on The Spinners’ “The Rubberband Man” (a track that Baldwin calls “the most challenging on the album”), while saxman Marion Meadows takes the spotlight on an expansive rendition of “People Make The World Go Round” and a slightly bluesy romp through The Spinners’ “I’ll Be Around.” Renowned R&B singer Vivian Green brings her seductive magic to an eloquent take on The Delfonics’ “La-La Means I Love You.” Baldwin also introduces the world to the powerhouse voice of Atlanta based singer Toni Redd, whose intensely emotional delivery of “Betcha By Golly Wow” is patterned after the recording the late Phyllis Hyman did of the song with drummer Norman Connors in the mid-70s.

“I take on the Quincy Jones role on this project, more as the leader and facilitator than the main focal point,” says Baldwin. “I called it ‘Bob Baldwin Presents...’ to reflect my desire to be the producer and create arrangements that focus on other instruments besides my piano. The original recordings of these songs never featured one person playing all the instruments. The tracks were created by a crew of guys in one room, under Thom Bell’s guidance, trading parts and sounds until the vibe was just right.

“This project could not have been achieved on a musically intimate level without the blessing of Thom himself,” Baldwin adds. “Preston and I met at a concert in LA in September 2011 and it was there where we chatted up Thom. Preston told me he had worked with Thom over the years and that’s where the quest began to pursue this tribute. In the liner notes that accompany Betcha By Golly Wow, Preston Glass writes, in an open letter to Thom Bell: “A song you and Linda Creed wrote contains the line “mere words cannot explain”…and that accurately paraphrases how I feel, when it comes to describing your impact on my career and my life.”

Adding his personal thoughts along those lines, Baldwin says, “The music of that era defined by The Stylistics, Delfonics, Spinners, along with Stevie Wonder and Aretha Franklin, was all a precious part of my childhood. They all sang great tunes with great deliveries that endure to this day. The songs of that time make anyone who grew up during those years reflect back on younger, lighter days. As an artist, I always thought it would be fun to tap into that era and create a feeling of youthfulness in people. Just like with Michael Jackson’s music, people listen to these versions and tell me where they were when they first heard them. Thom Bell was never considered a jazz guy, so it was fun to add a little of my New Urban Jazz flair to his great work.”
Posted by Jazz Chill at 9:02 AM