LOUIS ARMSTRONG - SATCHMO AT THE NATIONAL PRESS CLUB: RED BEANS AND RICE-LY YOURS 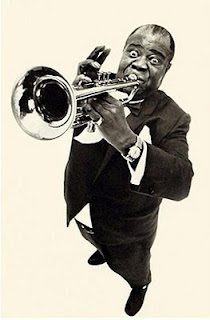 What if your favorite musician could return from the great beyond and play one last set that would, for a moment, make his music live again? And what if the music were new – something you have never heard before? It would be a moment to savor.

Well for those of you who are waiting for Elvis or John Lennon to return, you might have to keep waiting. But for those of you who long to hear the music of the greatest trumpeter of all time, Louis Armstrong, just one more time your dreams may be answered. And you should come to the National Press Club on April 27 for what is sure to be a memorable and historic occasion. On that day there will be a news conference followed by a panel discussion followed by a reception. Details will be released as the date gets closer.

Officials from the National Press Club, Smithsonian Folkways Recordings and the Louis Armstrong Foundation will announce their agreement to release a recording made on January 29, 1971 in the Ballroom of the National Press Club. The live recording is one of the last times Armstrong played his trumpet in public and is believed to be his last recorded trumpet performance. The recording was made into a limited edition record with only 300 copies most of which have vanished into attics. For several years a determined group of Press Club members have been working with their partners at Smithsonian Folkways Recordings to bring the music to the public. Now, with the help of the Louis Armstrong Foundation, the moment has arrived.

On April 24, Smithsonian Folkways Recordings, the nonprofit record label of the national museum, will release Satchmo at the National Press Club: Red Beans and Rice-ly Yours on CD and digital download via www.folkways.si.edu and retailers including iTunes and Amazon as well as the streaming services. The album release is part of the Smithsonian Institution's celebration of the 11th annual Jazz Appreciation Month.

Armstrong agreed to perform at the 1971 inaugural party of incoming National Press Club President Vernon Louviere who was a Washington correspondent but a native of Louisiana. At the time he was booked, Mr. Armstrong's health was poor. He had not played trumpet for much of 1970 and his shows were mostly 10 minutes of singing. So the Press Club crowd expected to hear Louis sing a couple of songs. But Armstrong packed his horn when he traveled to Washington. He was feeling better and ready to play.

January 29, 1971 was a gala evening at the Press Club. The master of ceremonies for the event was the British Journalist David Frost. The crowd of journalists, dressed in black tie, had a real sense that they were about to witness history. Louis responded to the crowd's enthusiasm with more than 30 minutes of spirited singing, scat and to everyone's great surprise, trumpet. His trumpet was only to be recorded two other times: during a taped television show with David Frost; and on the Tonight Show with Johnny Carson before a studio audience. It is believed that neither was turned into a recording offered to the public.

Source: National Press Club
Posted by Jazz Chill at 11:03 AM