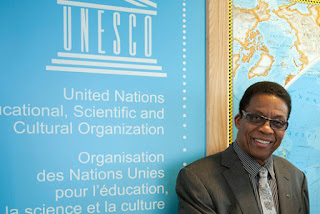 UNESCO Director-General Irina Bokova and UNESCO Goodwill Ambassador Herbie Hancock have  announced International Jazz Day to be held April 30th of every year. In partnership with the Thelonious Monk Institute of Jazz, the initiative- Hancock’s first major program introduced as a Goodwill Ambassador-will encourage and highlight intercultural dialogue and understanding through America’s greatest contribution to the world of music. International Jazz Day will foster and stimulate the teaching of jazz education with a particular emphasis placed on children from disadvantaged communities in classrooms around the world and will be offered to all 195 member states of UNESCO.

Said UNESCO Director-General Bokova, “The designation of International Jazz Day is intended to bring together communities, schools and other groups the world over to celebrate and learn more about the art of jazz, its roots and its impact, and to highlight its important role as a means of communication that transcends differences”.

In an address to UNESCO officials, Herbie Hancock said, “Please take a moment and envision one day every year where jazz is celebrated, studied, and performed around the world for 24 hours straight. A collaboration among jazz icons, scholars, composers, musicians, dancers, writers, and thinkers who embrace the beauty, spirit, and principles of jazz, all of them freely sharing experiences and performances in our big cities and in our small towns, all across our seven continents.” He went on to say, “Music has always served as a bridge between different cultures; and no musical art form is more effective as a diplomatic tool than jazz.”

International Jazz Day will be celebrated by millions worldwide on Monday, April 30th and will begin with a sunrise concert in New Orleans’ Congo Square, the birthplace of jazz. The event will feature a number of jazz luminaries along with Hancock including Dianne Reeves, New Orleans natives Terence Blanchard, Ellis Marsalis, Treme Brass Band, Dr. Michael White, Kermit Ruffins, Bill Summers, and others.

Tom Carter, President of the Thelonious Monk Institute of Jazz, said, “The Institute is pleased to be a partner with UNESCO in presenting educational programs and performances as a part of International Jazz Day. For more than a century, jazz has helped soothe and uplift the souls of millions of people in all corners of the globe. It stands for freedom and democracy, particularly for the disenfranchised and brings people of different cultures, religions, and nationalities together.”
Posted by Jazz Chill at 1:37 PM