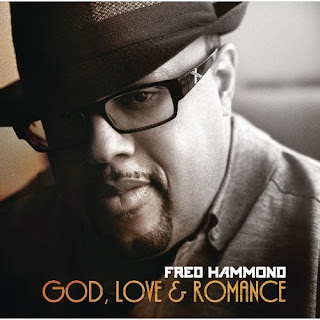 Fred Hammond has been a trailblazer throughout his 30-year career. He founded the legendary band Commissioned that brought freshly funky air to the traditional gospel world in the 1980s. Then, in the `90s, he ushered in the urban praise and worship music movement with his Radical For Christ ensemble – paving the way for artists such as Israel Houghton and Tye Tribbett. With his forthcoming 12th solo album, God, Love & Romance (Verity Gospel Music Group), Hammond continues to break new ground for the gospel genre. Disc one is a suite of love songs touching on the topics of courtship, romance and even lost love while disc two gives us the soul stirring gospel songs we’ve grown accustomed to from Hammond.

The 19-track set was inspired by Hammond’s life and by simply observing the world around him. “It’s been on my heart for about four years and I was encouraged by my good friends Pastor Mike & DeeDee Freeman (Spirit of Faith Christian Center, Temple Hills, MD) to finally do it,” Hammond says of his decision to record a collection of love songs. “A lot of times as men with Christian beliefs we don’t talk about the things that are really important to us in love relationships. I believe God uses not only my triumphs but He uses my tribulations, turmoil, and trials to help other people go through what they are going through.”

“These are my heart songs,” he says. “I sing my worship and I sing the gospel but there was something just pulling at me to sing about romantic love. “Often as Christians we don’t adequately address issues between couples. We pray, we give in the offering, tithe, we fast, and we have Bible class. You would think our relationships (in the church) should be the strongest, but 50% of all first time marriages in the church end in divorce and I believe the thread is that we don’t talk about what’s real.”

Shrouded within an Urban Adult Contemporary musical setting, Hammond gets the real talk discussion of these grown folks issues under way with devotional love songs such as “I’m In Love With You,” “You Are My Love Come True” and the jazzy “When I Come Home To You.” The melodies and chord changes emanate with a warm and familiar old school R&B flair. Hammond’s passionate tenor bends, stretches and soars with the emotional complexity and dynamism of the testament to weathering life’s storms as a couple on “Face It All,” a tune reminiscent of Major Harris’ classic 1975 R&B evergreen, “Love Won’t Let Me Wait” and Luther Vandross’ “Here and Now”.

However, these songs don’t only deal with the blissful side of love. The up-tempo jazz funk of “What Can I Say, What Can I Do?” asks for a chance to prove this couple can be more than just friends while “One More Try” is a last ditch effort to save a relationship.

Hammond knows that there are many people who may appreciate the romance aspect of this album but they still want to hear him get his praise on and he doesn’t disappoint in that regard. As the forerunner of urban praise and worship music, no one does it quite like Hammond. He delivers sincere worship ballads such as “Amazing Love” and “Love Song To The Lamb.” He also continues to bring festive funk with up-tempo jams like “Better Love” and “I Will Lift You Up.” He offers a revamped rock-edged rendition of his 2004 smash “Celebrate (He Lives)” alongside the album’s first radio hit, “I Feel Good,” a breezy let the top down jam. “I Feel Good is a declaration that we take a vacation from the everyday stresses of life and concentrate on the blessings that God has given. It gives us an anthem to speak encouragement over ourselves on any gloomy day and give it a positive outlook.”

Life for Hammond these days is spent with his 14-year-old son and his 24-year-old daughter both who live with him in Dallas, TX and keep him grounded. He moved to the city to sit under the teaching of Bishop T.D. Jakes. He and his brother Ray Hammond co-manage his career from their fHammond Entertainment headquarters where they have begun to develop films and produce music on other artists. During his leisure time, he enjoys spending time on the water, riding his motorcycles and customizing cars.

Hammond made his professional foray into the music business as the bass player for the Grammy Award winning gospel group, The Winans, in 1980. Two years later he formed the urban gospel band, Commissioned. Then, in 1994 Hammond went solo and introduced urban-flavored praise and worship music into the black church when it was still considered a white church phenomenon. In the years since, he’s become one of gospel’s top leading artists and earned a half dozen gold or platinum record certifications for albums featuring hits like Glory to Glory, No Weapon, We’re Blessed and more recent tunes such as “This is the Day” and “They That Wait.”

God, Love & Romance promises to extend Hammond’s long legacy of not just creating hits but also creating music that touches the heart and soul of believers. It’s Hammond’s hope that this current project will open the door to a more productive dialogue within the church about romantic relationships. “I see a lot of people having issues with relationships and trying to make them work,” he concludes. “I don’t think this record is the answer and cure for every broken relationship or that everybody is going to get it together. I think this is simply an injection of reality within the contemporary church world, as we know it. ”
~Amazon.com