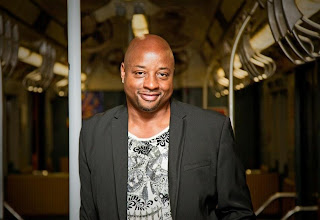 Born and nurtured in Brooklyn, New York, James "D-Train" Williams began his singing career at age 6. He sang in many church choirs and school choirs. While attending school at Erasmus High School he earned the prestigious title “D-Train” as a Defensive Tackle, football star. (”When he hits you, you felt the impact of the Train”). James’ career came into play by a chance meeting, while helping out his fellow classmate the legendary Will Downing in the studio, he met producer Hubert Eaves III and the two embarked on a musical journey of Number 1 Billboard Hits.

James "D-Train" Williams gave memorable and fresh-sounding R&B/dance tracks of the early to mid-1980’s. Along with Hubert Eaves III their first single, the brilliant “You’re The One For Me,” was released on Prelude Records in 1981. The song hit number one on the dance chart in early 1982 and kept that position for three weeks. Their first album for Prelude was 1982’s entitled You’re The One For Me. The album stormed the club charts and produced three powerhouse 12″ singles. Besides the stunning title track it also featured “Keep On” and the much-covered “Walk On By.”

Music, D-Train’s second album, followed in 1983 and was supported with another batch of singles: “Keep Giving Me Love,” “Are You Ready For Me,” and the major club smash “Music” amongst them. “Something’s On Your Mind,.” Followed by “Oh how I Love You Girl”, top 10 R’N’B hit, "Misunderstanding" (from his debut Columbia album, Miracles of The Heart,) “In Your Eyes”, and a host of others.

Along with singing background vocals on CD’s for many outstanding artists, James D-Train Williams is one of the number one Jingle vocalists in the industry. Spots such as; Be All That You Can Be (Amy & Navy), Verizon, Kmart, Pampers, Got Milk, Cotton, AT & T, Optimum Online, New Jersey Bell, Kodak, Nescafe, Hanes, Budwiser, Home Improvement, and New York One to name a few.

James has appeared in such films as; “Keeping The Faith” with Ben Stiller, “A Walk In The Park “with Richard Gere & Winona Ryder. He is also the lead Vocalist for the television theme Pokemon, Pokemon The Movie and background vocalist for Walt Disney’s “Hercules” The Movie.

James "D-Train" Willimas is scheduled to appear at the upcoming Happy Days Music Festival on June 2, in Surrey, UK, along with artists Jocelyn Brown, Gwen McCrae, and Colonel Abrams