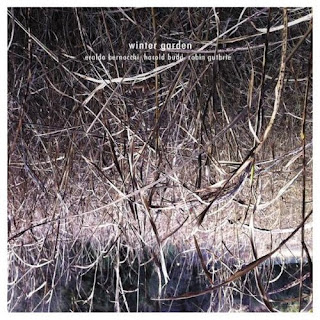 At a time when music is becoming faster, louder, glitzier and everyone is looking for the perfect hook, three visionary artists have pooled their talents to bring a cleansing breath to the modern musical landscape. With Winter Garden, producer-sound designer and RareNoiseRecords co-founder Ernaldo Bernocchi has teamed up with the enigmatic poet-pianist-composer and ambient music pioneer Harold Budd and multi-instrumentalist-sound engineer Robin Guthrie to present an ambient music offering of rare beauty. Contrary to more conventional band recordings, Winter Garden, can be thought of more as a studio concoction; Budd plays piano, while Guthrie’s subtle touches of guitar, piano, keyboards and auxilliary instruments is radically treated with reverb and effects in the post-production stage. A pastiche of shimmering, tranquil soundscapes that gently insinuate themselves into the subconscious, Winter Garden may serve as the perfect antidote to urban frenzy.

With such evocative titles as “Don’t Go Where I Can’t Find You,” “Losing My Breath,” “Harmony and the Play of Light” and “South of Heaven,” the music heard on Winter Garden can be considered a modern day extension of such early ’80s ambient music classics as Brian Eno’s Music for Airports and Budd’s atmospheric collaborations with Eno on The Pavilon of Dreams, The Plateaux of Mirror and The Pearl. Only two pieces – the pulsating “Entangled” and “Stay With Me” – stray from the ambient nature of the project by incorporating beats and groove. Elsewhere, Winter Garden provides lots of billowy sound washes for listeners to luxuriate in, with Budd’s minimalist grand piano playing and Guthrie’s signature reverb-soaked guitar drones informing the atmospheric mix.

For Bernocchi, the zen-like approach taken on the album is a far cry from his beginnings as a guitar player in Italian punk bands. “I was 14 when punk exploded and I was living on the empire border, this is how I recall Italy. From a distance, everything appeared even bigger. Before punk I was listening to hard rock and stuff like Pink Floyd or Tangerine Dream. Punk gave me the idea that anybody could do music, could use energy on stage. It mattered nothing who was a great player or not, it was about the message, the power. At 14 this was a real blast. Soon after, I became interested in experimenting with sound. This explains why I’ve always been into electronic music or treated music.”

The producer also cites Brian Eno as a major influence in plotting his new musical direction. “Eno was a real master for me. Sound-wise I really was into his stuff from the beginning. But to be honest, what Eno really transmit to me was space – the same sense of space I found in Miles Davis records years after or in Bill Laswell albums.”

Ambient music pioneer Budd previously collaborated with Bernocchi on 2005′s Music for Fragments on the Inside, the soundtrack for an installation at Italy’s Palazzo Delle Papesse Centro Arte Contemporanea by videographer Petulia Mattioli and poet Mara Bressi. Robin Guthrie, founder of the early ’80s Scottish post-punk alternative rock trio Cocteau Twins, had also previously collaborated with Budd on the 2005 soundtrack for the Gregg Araki film Mysterious Skin and on two sister projects recorded simultaneously in 2006 — After the Night Falls and Before the Day Breaks. Their ongoing musical relationship was forged in the mid ’80s when Budd appeared on the Cocteau Twin’s 1986 album, The Moon and the Melodies. Budd and Guthrie most recently collaborated on 2011′s Bordeaux.

Regarding the Winter Garden sessions, Bernocchi says, “We recorded for five days in a studio in Tuscany, a lovely place 20 minutes from my house. We played all together in the same room. Harold took care of the acoustic piano. I played all electronics and the electric piano…I was scared to death to duet with Harold. When he proposed that to me I was astonished because I’m not a piano player. And Robin took care of the guitars. It was a risk. We knew really well that recording the piano with me and Robin in the same room could lead to some serious background noise and pollution, but we did it anyway. I spent two weeks cleaning tracks! The result is really immediate, really emotional.”

Bernocchi and Guthrie mixed the album together, their sound engineering tendencies overlapping in post-production. As Bernocchi says, “Ultimately, there’s a maximum of maybe 15% post-production in this album. We only repeated some guitars or piano parts. That’s all.”

As for where the peaceful, ethereal Winter Garden fits in the ever-expanding RareNoise catalog, Bernocchi says: “RareNoise was created with the aim to produce good music perfectly knowing the music business was and is a disaster. We are not really concerned about genres or pigeonholing records. I think it’s an honor for RareNoise to have Harold and Robin on board for this album. I’d love one day to be on stage with them and also some other RareNoise artists at the same time. It could be interesting.”
Posted by Jazz Chill at 11:07 AM