CHRISTINA AGUILERA - BACK TO BASICS 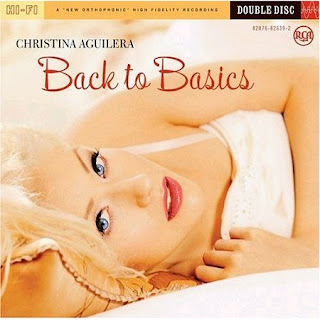 Paying tribute to the music that inspired her, pop icon Christina Aguilera's album Back To Basics, is a modern take on vintage jazz, soul and blues from the 1920s, '30s and '40s, the album is wildly inventive with a throwback style creating a sound that's gritty and raw. Back To Basics reunites her with producer Linda Perry as well as creating new collaborations with producers such as DJ Premier.

"This is a concept album that follows a bold, set vision," stated Aguilera. "The touchstones are Billie Holiday, Otis Redding, Etta James and Ella Fitzgerald... what I used to call my 'fun music' when I was a little girl." Back To Basics utilizes an orchestra, choir, string quartet and jazz horns, as well as techniques that offer a vintage sound and sensibility. I Got Trouble incorporates a scratchy blues feel, while Candy Man recalls the tight harmonies of all-girl groups from the '30s and '40s, Save Me From Myself is an emotionally naked, raw-sounding song, and Thank You, is dedicated to her fans, features DJ Premier splicing bits of Genie In A Bottle with fan voicemail messages. Also sure to appeal to Aguilera fans is the risque song Nasty Naughty Boy (which has a '20s burlesque feel) and the sassy club track Still Dirrty.

Upon release the album debuted at No.1 in the US, the UK and eleven other countries. The album received generally positive reviews, and the critically acclaimed lead single "Ain't No Other Man" was a substantial success, reaching No. 2 on the World Chart, No.6 in the US, and No.2 in the UK. Producers on the album included DJ Premier, Kwamé, Linda Perry, and Mark Ronson. The follow-up singles did very well in different regions, "Hurt" in Europe and "Candyman" in the Pacific. She co-directed both music videos, the former with Floria Sigismondi who directed her "Fighter" video, and the latter, "Candyman", with director/photographer Matthew Rolston which was inspired by The Andrews Sisters. Back to Basics has sold 4.5 million units worldwide,with over 1.7 million sold in the US.
Posted by Jazz Chill at 4:29 PM

Chrisrina is and has done something fantastic things.
The best thing i've done is making My own mixtape with the best tracks. She has an amazing voice

Btw! Really love your blog! Added me as a follower!