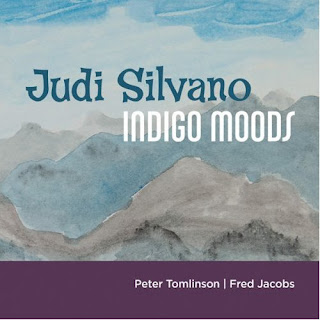 Storied jazz vocalist and composer Judi Silvano celebrates the 20th Anniversary of her recording career, with the release of her tenth album, Indigo Moods (Jazzed Media). What makes this release different from most of Silvano’s previous nine albums is that Indigo Moods consists entirely of familiar popular jazz standards delivered in an extremely intimate setting.

This album exemplifies the impact of the trio format with which the veteran singer has been working for several years, in venues across New York, Philadelphia and the Mid-Atlantic area, featuring pianist Peter Tomlinson and trumpeter Fred Jacobs.

The songs are mostly pieces that the trio has performed live on gigs, but, she elaborates, “There are always surprises when you get into the recording studio! We didn’t start with set arrangements. I led the session but with a collaborative attitude and because we are so attuned to each other, things would just spontaneously happen in intriguing places – I love that!”

A Philadelphia native who has lived in New York for most of her professional life, Silvano’s background was originally in dance and formal “classical” music. However, once immersed in Manhattan’s bustling “downtown” arts scene, she was invariably drawn to jazz and improvised music.
Posted by Jazz Chill at 10:57 AM