PHILIP BAILEY - CHINESE WALL / INSIDE OUT 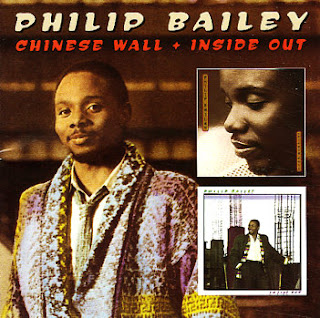 Two crucial albums from Philip Bailey – back to back in one package! First up is Chinese Wall – a big breakthrough for Philip Bailey – and a record that was kind of a second-level explosion for the Earth Wind & Fire sound in the 80s! There's a definite crossover feel to the record – a style that takes Bailey's soulful vocals, and mixes them with lots of catchy hooks – in ways that push the Kalimba aesthetic even more into mainstream modes. Yet the album's still got some solid soul grounding, too – thanks to arrangements by Tom Tom and Arif Mardin – which is a nice contrast to the production by Phil Collins, who also guests on the hit "Easy Lover". Other cuts include "Time Is A Woman", "Go", "Walking On The Chinese Wall", "Photogenic Memory", "I Go Crazy", and "Children Of The Ghetto".

On Inside Out, Philip Bailey hits a great groove – working with Nile Rodgers, who gives him a lean, clean sound that works perfectly with his vocals! The sound is a nice change from the direction Bailey was heading in previously – a return to the focused soul of the later Earth Wind & Fire years, with his amazing lead opening up in ways that few other singers can match. Tunes are pretty well-penned too – catchy, but never cloyingly commercial – and titles include "State Of The Heart", "Welcome To The Club", "Special Effect", "Because Of You", "Take This With You", "The Day Will Come", "Back It Up", and "Echo My Heart". CD also features the bonus track "State Of The Heart (dub mix)". ~ Dusty Groove
Posted by Jazz Chill at 8:31 AM