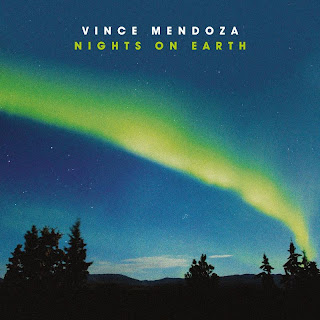 After a remarkably productive decade which saw him writing stellar orchestral arrangements for recordings by such popular singers as Bjork, Melody Gardot, Sting and Joni Mitchell (he won two of his six Grammy® Awards and 25 nominations for his contributions to her Both Sides Now in 2000 and Travelogue in 2003), Vince Mendoza has shifted focus back to his own compositions for the first time in 13 years. His most personal and compelling project to date, Nights On Earth is yet another crowning achievement in the career of the acclaimed composer-arranger-conductor.

On this eagerly-awaited follow-up to Epiphany (which he recorded in 1997 with the London Symphony Orchestra), Mendoza recruited an all-star cast of longtime collaborators like guitarists John Abercrombie, John Scofield and Nguyen Le, drummer Peter Erskine, percussionist Luis Conte, organist Larry Goldings, steel drummer Andy Narell, pianists Kenny Werner and Alan Pasqua, saxophonists Bob Mintzer and Joe Lovano. He is also joined by such new friends as Brazilian vocalist Luciana Souza, Malian kora player and singer Tom Diakite, Argentinian bandoneon master Hector del Curto, Algerian drummer Karim Ziad, French saxophonist Stéphane Guillaume and young American jazz stars in bassist Christian McBride, drummer Greg Hutchinson and trumpeter Ambrose Akinmusire, a winner of recent awards from the Jazz Journalists Association and DownBeat. Along with members of the Metropole Orkest, the Dutch ensemble that Mendoza has presided over as chief conductor for the past six years, they bring to life these evocative pieces that flow directly from the composer’s heart to his pen.

“I always thought that being a musician is about having a community of artists that inspires you,” says Mendoza, “and I think part of the process of the creation of this recording has to do with the people that I have met and learned from along the way. A lot of what this music has to do with is celebrating that community of the musicians from the many traditions that they represent.”

While names such as Abercrombie, Scofield, Lovano, Werner, Mintzer and Erskine represent the jazzier side of Mendoza’s community of artists (they appeared on his 1990 Blue Note album Start Here and his 1991 follow up for the label, Instructions Inside), musicians like Souza, del Curto, Diakite and Ziad represent his adventurous explorations into world music (as on 1992′s Jazzpana and more recently on 2009′s Viento: The Garcia Lorca Project). “I have an affinity with these musicians and their music, as they also have with my writing,” says Mendoza. “I wanted to incorporate them into my compositions, to frame their voice in an interesting way. And I thought they would have a connection to my writing style in their improvisations.”

From the flamenco flavored opener “Otoño,” fueled by the sound of cajon and palmas, to the soothing bossa nova “Ao Mar,” with lyrics composed by Souza and sung with alluring tones in her native Portuguese, to the African flavored “Shekere,” featuring stirring vocals and kora playing by Diakite and a killing distortion-laced electric guitar solo by Le, Mendoza cuts a wide stylistic swath through his Nights on Earth. Add the epic sweep of “Poem of the Moon,” featuring bracing solos from Akinmusire and Abercrombie, along with gentle and evocative numbers like “The Stars You Saw” and “Beauty and Sadness,” both featuring heart-wrenching, lyrical solos by Werner and Lovano, the atmospheric and chamber-like “Addio” for bandoneon and string quintet, and the romantic “The Night We Met,” featuring a delicate, transcendent piano solo by Pasqua, and you begin to get a fuller portrait of Mendoza the composer.

“Gracias,” simultaneously evokes the spirit of Santeria in the Obatala groove of Luis Conte’s bata, and the church in the swells of Larry Goldings’ organ work. Scofield also turns in some highly expressive string-bending in his solo here. Says Mendoza of Scofield’s solo, “You know it’s John from the first second – from his sound and where he puts the notes, and the freshness with which he approaches my music. That’s something I’ve always appreciated about what he’s brought to these records. Nothing is calculated. It always feels like he’s in that moment there…and the moment is always brilliant and soulful.” “Everything Is You,” is a refined number that opens with classical counterpoint between flutes, harp, piano and cello before yielding to potent solos by Pasqua and Mintzer. The closer, “Lullaby,” is a stirring duet between cellist Fred Sherry and bandoneon virtuoso Curto. “I think that the music on this record has a lot to do with the loss of my parents and the value of love,” says Mendoza in reflecting on Nights On Earth. “‘Otoño is about my father. He really loved flamenco music and Spanish culture. ‘The Stars You Saw’ is about telling my mother stories of my first trip across the ocean when I was a young budding musician starting to travel many years ago. And the use of the bandoneon on ‘Addio’ has a lot to do with the Italian background on my mother’s side. The bandoneon and the accordion were always sort of a part of family functions. ‘The Night We Met’ and ‘Everything is You’ have to do with my wife. They are about romance and the miracle of love. ‘Ao mar’ and ‘Lullaby’ have to do with my son and the heart-connection we have with our family.

“We chose a beautiful photograph of the Aurora Borealis for the cover, and to me this says a lot about a life in music and art. Our experiences and encounters are sometime brief, sometimes magical and fleeting, but the images and feelings from these encounters always go deep into our hearts and create lasting memories. This is the place where I find music.”

An inspired, affecting collection of moving and deeply meaningful music, Nights on Earth is Mendoza’s most profound and heartfelt offering to date.
Posted by Jazz Chill at 9:31 AM