MIKE LEVINE - THINKING OF YOU 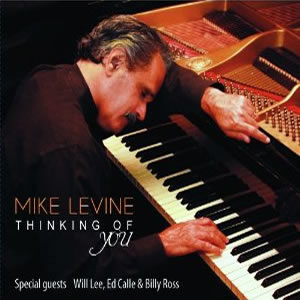 Pianist Mike Levine is a man of many talents whose career is a blend of different aspects of music. He attended the University of Miami where he studied piano with Vince Maggio. Here at the UM, that Mike formed a group with Billy Ross. They released their first album That Summer Something in 1981, which featured Pat Metheny as a guest artist. Mike wrote the majority of the bands compositions. The recording earned national recognition for them and stayed on the top ten contemporary Jazz (AOR) charts for six weeks. Subsequently they recorded “Humidity” which also did well. The Ross-Levine Band was the opening act for Michael Franks, Gato Barberi, Dionne Warwick, and many others.

Mike's latest release Thining Of You is an amazing CD offering thirteen tracks ten of which are originals produced by composer, pianist and producer Mike Levine. Thinking Of You brings you the best in contemporary soft Jazz music.

He toured with Raul DiBlasio where he visited Mexico, Costa Rica, New York, Dominican Republic, San Francisco, Seattle, and Austria. With Ed Calle and Dana Paul, he performed at the Aruba Jazz Festival and with the Jaco Pastorius Big Band he played at both the Reading Jazz Festival and the Detroit Jazz Festival. At the “Taste of Art & Jazz Festival” in Miami Lakes he played with The Nantucket Sound, The Atlantean Driftwood Band, Ross-Levine Band, and Ed Calle Quintet, Mike also performed at the Hollywood Jazz Festival, Jazz Showcase in West Palm Beach, Pleasure Island in Orlando and the Jazz Corner in Hilton Head. At the “Jazz on the Green” festival , Mike played for thirteen years with Peter Graves’s Atlantean Driftwood Band.

He performs locally in South Florida’s top Jazz and Blues venues, Arturo Sandoval, Jazzid, Van Dyke, O’Hara’s, Hard Rock Café, and as well various hotels and restaurants in the area with local artists, Dana Paul, Wendy Pederson, Paulette Dozier, Billy Ross and Peter Graves Band and many more. Summer of 2007 Levine performed at the Syracuse and Montreal Jazz Festival with the Jaco Pastorius Big Band. At the Amelia Island Jazz Festival, October 2007, Mike was one of the featured artists. Mike's first CD, "From The Heart", which features both Hiram Bullock and Ed Calle as guest artists, is available at www.rhombus-records.com as well as www.mikelevinemusic.com. Mikes latest CD, Thinking Of You, with Special Guests: Will Lee, Ed Calle and Billy Ross, is available at www.mikelevinemusic.com, CD Baby, Amazon, I-tunes and other Internet sites.

www.mikelevinemusic.com
Posted by Jazz Chill at 10:11 AM