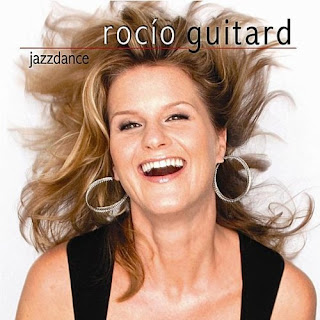 Whether belting out lyrics like a powerhouse or interpreting sensitive ballads, Rocío Guitard is a superb singer. Her latest CD, JazzDance, is a revelation for she reinvents standards in surprising ways, and shows that jazz can be both creative and accessible, danceable yet quite unpredictable.

Born in Germany and raised in Spain, Rocío remembers hearing Beatles songs in her parents’ car. She learned virtually every Beatles song by heart, sang along and, when she was bored with that, she harmonized. Rocío started playing the recorder when she was three, moved on to other instruments when she was six, and at eight began studying piano and music theory at the Royal Conservatory in Madrid, graduating when she was 13. She taught herself to play guitar at 15 and began writing songs of her own.

Rocío played piano in her high school band when she was 14. “The band had a singer who couldn’t read music and he had to learn a new song. I agreed to sight read it for him, and at that moment the bandleader walked in and heard me sing. He thought that I should do the song instead, and I have been singing ever since.” When she moved to Germany to attend college (earning a Masters Degree in Mathematics from the Ludwig Maximilian University), she started singing in professional a-cappella groups and choirs. Soon Rocío was singing lead and solos. “By the time I graduated college, I was making a living singing, so I decided to turn my passion into my profession. Unfortunately there was not enough exposure, enough genres, enough musicians, or enough everything in Munich. I decided to sell everything that I owned and come over to the United States, arriving in the San Francisco Bay area in 1998 with two suitcases and a phone number for a voice coach.”

Rocío opened a teaching studio soon after her arrival and became a widely respected vocal coach. “Some teachers had given me some bad habits and then there were others who gave me a lot of good habits. One way for me to give back to the singing community, especially the younger generation, was to compile the things that work. I am a working performer. I do voiceover work, I teach 4-6 hours a day, and then I go out and perform or record. I use my voice constantly yet I never lose my voice, so what I am doing is healthy.” Rocío is an international lecturer and is involved in seminars, workshops and private lessons. She visits Central Europe twice a year and has worked with hundreds of singers for the Jazz Academy in Graz, Austria, the Green Voice Institute in Munich, the Theater Academy of Krakow, Poland and the National Academy of Recording Arts and Sciences in San Francisco. “I work with beginners as well as seasoned and touring veterans from all genres. I teach them to sing in all ranges with power and no effort. The reward that I get is seeing a student’s face light up when they realize that high notes are a breeze to sing if you just know how.”

In addition to her teaching, Rocío has participated in a countless number of studio sessions and performed at clubs, restaurants and festivals since her move to San Francisco. Her eclectic tastes in music are reflected by her experiences which include performing rock and pop with One Velvet Down and Hip Affair, Latin music (Salsa Profundo), R&B and soul with Silicon Vibe, classical music (Grupo Cervantes) and jazz with such groups as The Funny Valentines, CrossCurrent, The Mirabai Ensemble and Jazz By Design.

In 2002 Rocío Guitard recorded her first CD as a leader (Mosaique) which featured her songs in a variety of styles including jazz, pop and world music. Windows, a set of neo-soul originals followed in 2008. JazzDance is a departure for it mostly features Rocio coming up with strikingly new renditions of jazz standards.

Bothered that jazz was considered background music by many listeners, Rocío wanted to make a difference. “I went to see a concert at Yoshi’s by a well known pianist. The band was phenomenal but not a single foot was tapping, not a single head was bobbing, and nobody in the room was moving to the music. Jazz used to be the music that people went out to dance to in the 1940s before it became this intellectual art form. We lost much of the audience because the average person cannot relate anymore; it became music for musicians rather than for the general audience. So for JazzDance, we took songs from that time and a little later and gave them a contemporary treatment. I treated the songs as if they had never been recorded before, infusing them with a little bit of pop, soul, latin and funk without losing their essence. My goal was to strike a healthy balance between what audiences today are used to and the improvisational approach. I want to get people moving again to jazz.”

JazzDance was recorded by Rocío with her regular band, musicians who she has been performing with during the past few years. The group consists of keyboardist and co-arranger/co-producer Greg Sankovich, bassist Jerry Burdick, drummer Carlos Almeida and saxophonist Lincoln Adler with guests Ross Wilson (doubling on trumpet and trombone), cellist Kris Yenney, and percussionists Michael Spiro and Alex Marino.
JazzDance opens with a brief unaccompanied “Intro” that has Rocio welcoming listeners to the CD. Along the way there are many exciting moments. “Foodie Toonz” is a humorous and ultimately logical mixture of “Frim Fram Sauce,” “Peel Me A Grape” and “I Can’t Get No Satisfaction.” Charlie Parker's “Confirmation” is stretched out beyond bebop. “Respect” is atmospheric, exuberant and jazzier than other versions while Cole Porter’s “Night And Day” is given a complete transformation, sounding like a recently composed ballad. Rocío’s catchy “Just Because,” a contemporary love song, deserves to become a standard. Bob Dorough’s “Devil May Care” is slowed down and, during its wild climax, Rocío’s wordless sounds interact with the other musicians. Annie Ross’ “Twisted” is always performed in a conventional bebop fashion, but this time it is outfitted with funky rhythms that divorce the song from bop and turn it into a lowdown blues, giving it fresh life.

“Put The Blame On Mame,” which Rita Hayworth sang in the film Gilda, starts out sounding like an old record before it becomes quite soulful. The late 1940s r&b hit “Harlem Nocturne” is turned into an atmospheric ballad while “Sing Sing Sung” is quite a tour-de-force for Rocío. She sings all of the parts on the classic big band hit “Sing Sing Sing,” from string bass to high note trumpets. Finally, “Weathered Coffee” finds a great deal of common ground between “Black Coffee” and “Stormy Weather”, and “Reprise” serves as a perfect summation for the memorable set.

For the future, Rocío Guitard’s main goal is to expose the wider public to the music she loves, and to make listening to jazz a fun experience. With her remarkable singing and teaching talents along with her infectious spirit, her impact on the contemporary music and jazz scene will be felt for many years to come.

“Few other singers could put on such a display so successfully. (…) Throughout JazzDance, Rocio Guitard shows that she is quite a powerhouse, one who has a wide range, a beautiful voice, and the intuitive ability to be a major jazz singer. This set is highly recommended.” Scott Yanow, author of ten books including The Jazz Singers, Swing, Jazz On Film and Jazz On Record 1917-76

“Rocio Guitard is an extremely creative and exciting vocalist on the jazz scene today. Her innovative arrangements and wide spectrum of expression stand heads above the army of typical jazz interpreters. Listen to her.” Jeffrey Wood, Fantasy Studios

“Rocio Guitard is what music is all about.” Joe Kelley, WVOF

“Fantastic job on the album, and we look forward to more of your music.” Mark Stanley, SoundTraxx.com