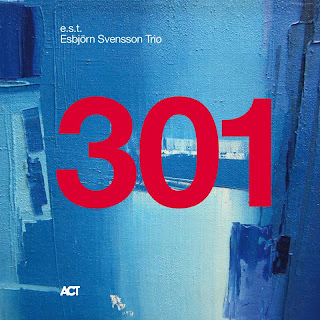 ACT Music has announced the release of 301, a full album of previously unheard material by e.s.t. (Esbjörn Svensson Trio), available on May 8. The album is a follow up to e.s.t.'s 2008 effort, Leucocyte, and is the group's second album following pianist Esbjörn Svensson's tragic death (prior to Leucocyte's release).

Heralded as one of the most exciting jazz bands of the decade, the seven-track album features Svensson with his longtime band mates, drummer Magnus Öström and bassist Dan Berglund.

In January 2007, e.s.t. was on tour in Asia and Australia performing shows in Tokyo, Osaka, Yokohama, Jakarta, Perth and Sydney. It was their third tour of Japan and their second time on the continent; and the venues and audiences had become noticeably bigger.

Only a few weeks before, they had finished their triumphant tour of Germany, including a legendary performance in Hamberg which resulted in Live In Hamburg (ACT, 2007), awarded "Album of the Decade" by the London Times. It was undoubtedly the prime time for the style-defining jazz band of the 2000s.

The group decided to rent the famous "Studio 301" in Sydney for their off-days in the middle of the Australian tour and jammed for two consecutive days to develop new songs and material. Altogether they recorded nine hours of music. Leucocyte became the first release from these sessions and has been praised by critics and fans alike as a ground-breaking work that leads into a new musical universe.

Very soon after the recording, Svensson had edited much of the material down to two albums. And so the plan at the time was to release either a double album or two consecutive albums from this recording. Svensson's tragic passing on June 14, 2008 (as a result of a scuba diving accident) disrupted this undertaking and only one of the albums, Leucocyte (ACT, 2008), was released at the time.

Three years later, in October and November 2011, Berglund and Öström revisited the material from that recording session and together, with the band's regular sound engineer Ake Linton, made their own edit for an album which is now called 301, on the basis of the name of the studio where the album was recorded.

e.s.t. was a phenomenon: A jazz trio, that saw itself as a pop band that plays jazz, which broke with the tradition of leader and sidemen in favor of equality within its members, which not only played jazz-venues but also venues usually reserved for rock bands, which used light effects and fog-machines in their live shows, which got a whole audience to sing-a-long to jazz-standards as eg. Thelonious Monk's "Bemsha Swing", is a trio that goes beyond the scope of the usual classic jazz trio.

Their music was found in the pop-charts and their videos played on MTV Scandinavia. With their unique soundscape, combining jazz with drum 'n' bass, electronic elements, funk rhythm, and pop and rock as well as European classical music, e.s.t. won an audience spanning from the classic jazz fans to the younger hip hop fans. Critics and audiences worldwide agree: e.s.t. was one of the most innovative jazz bands of the 21st century.