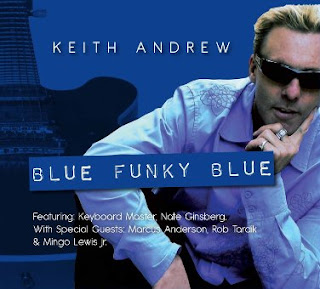 Guitarist/keyboardist/vocalist Keith Andrew brings us a funky, saucy, and smooth offering that is diverse, melodic, and loaded with swagger. This release, Blue Funky Blue, which also features saxman Marcus Anderson and guitarist Rob Tardik on select tracks, boasts a delightful blend of contemporary jazz, fusion, blues, funk, and touches of World, a recipe not unfamiliar to Andrew.

On Blue Funky Blue, you’ll find yourself in the familiar settings of contemporary jazz (e.g., “Pookies Groove”), blues (title track), and funk (“Who Dat, Where You At?”) only to witness a slight detour into exotic areas of World (“Fertile Crescent,” “Sherpadance”) and great fusion (“Little Sierra,” “Makes Me Wonder,” “New Way”). You’ll also find tracks that just do their own thing, defying categorization or pigeonholing (e.g., “Howl Mountain” and the raspy “In the Middle of the Night,” which play with fusion, blues, and rock, as well). The outrageously swinging uptempo bluesy “Who Dat, Said Who Dat?” showcases Andrew’s ability to fire off lightning riffs and directs the spotlight toward the nimble fingers of keyboardist Nate Ginsberg, as well. This piece is jazz/blues on steroids, so hold on to your hats for the ride. Impressive showing of skill for sure.

To say this album is full of emotion and creativity is an understatement. This had to be a true experience for all who participated in the making of this project. I personally wouldn’t say that Blue Funky Blue is as comprehensively bluesy and funky as its title might suggest, but if you want creativity, diversity, and totally impressive musicianship, open this door. You’ll find that you’re in the right place.
~ Ronald Jackson /.thesmoothjazzride.com
Posted by Jazz Chill at 12:09 PM