MARC STAGGERS – KEY TO MY HEART 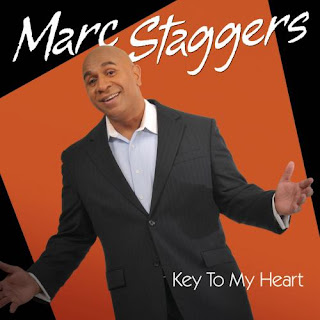 Marc Staggers—a talented Washington, D.C. native—has released his new album Key to My Heart on Expansion Records, much to the excitement of many of his supportive fans. This album continues the soulful musical journey that started with the release of his debut R&B album Then and Now in 2009. His vocal style, often compared to famous soul singers of the past and present, will certainly captivate and continue to generate fan interest across the world.

The development of his unique style is the result of a lifetime of musical influence, including the late Luther Vandross.

Staggers has one of those great deep soulful voices, similar to Will Downing in style, in fact this album could easily have been recorded by Will. 'Lets Just Take Our Time' is a really nice upper mid tempo floater, 'Steppin Out Tonight' and the more uptempo 'Stop Playing With My heart' will keep the dancefloors moving, the ballads 'Promise Me', 'Lifetime Lover' and 'Soul Summer Love' are also strong. The mid tempo 'Key To My Heart' is another highlight on this strong solid traditional soul album.

Marc started singing in the church choir and studied voice as he was growing up. Marc's Television appearances have been featured on the Maryland Public Television (MPT) program "Artworks This Week," with Nate Howard; ABC Channel 2 News, with Terry Owens; ABC Channel 2 "Grace & Glory," with Lee Michaels; PAX Cable Television show "Life Styles," with Deborah Britt; and the cable program "Glorify His Name," hosted by James McCollum.
Marc’s soulful voice has carried him into many venues, including singing background for Mom and Pop Winans at "From the Heart Ministries" and for Kathy Myers at Lincoln Theater in Washington DC. He has also performed and recorded with the Late Clifton Dyson and Stu Gardner, musical director for Bill Cosby.

After many years of pursuing gospel music, Marc felt that his true heart’s desire was in producing music that was reminiscent of the type of soul music he listened to while growing up. This led to his debut CD Then and Now, which had topped the UK’s “Sweet Rhythms Chart,” for three weeks at the number one position. The album has received critical acclaim from music critics from around the world. The album has also made inroads into the U.S. radio market, thanks in part to independent Smooth Jazz/R&B promoters “Gorov Music Marketing”.

In 2011, Marc released a summertime single entitled “Soul Summer Love” that reached #13 on the U.S. jazz charts, and still continues to be played in regular rotation on a number of stations. “Soul Summer Love” is included in Marc’s new album Key to My Heart, which features such talented artists as musical composer and arranger John Stoddard; world-renown Saxophonist Kirk Whalum; and versatile Soprano Adoree Johnson, who appeared on the U.S.-version of American Idol.

Other behind the scenes opportunities have included producing a radio talent show that showcased new gospel acts called "If You Can Dream," which lived a short season on Radio One's WYCB 1340AM in Washington, D.C. Marc Staggers has also been featured on numerous live performances, including The Million Moms’ March in Washington, D.C. and at the British Embassy for former Washington Redskin Darrell Green’s Charity foundation.

On passed visits to the United Kingdom, Marc has been interviewed by Solar Radio's Deejays Dave Brown, DJ Bigger (now on Starpoint Radio), and Gary Spence. Marc also performed at Solar Radio's 20th Anniversary celebration and at Smooth FM's (now known as Smooth Jazz) TSOP event in Prestwich, which was hosted by DeeJay Richard Serling. ~ Amazon.com
Posted by Jazz Chill at 10:00 AM