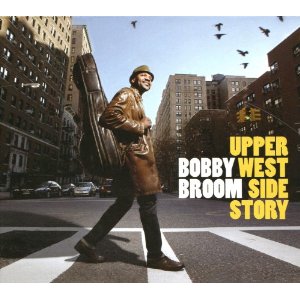 Bobby Broom's new CD, Upper West Side Story, is the guitarist's tenth album in as many years -- the culmination of a golden period of prolific creativity and steady artistic growth. Five of those recordings have featured his jazz trio with bassist Dennis Carroll and drummer Kobie Watkins, who've worked as a unit since 1997. Origin Records, Broom's longtime label, will release the CD on May 15.

Providing an intimate look at Broom's musical personality and the trio's fully developed group chemistry, the original compositions on Upper West Side Story are described by Broom as "an ode to where I'm from." They reflect a wide range of influences across a spectrum of genres while always remaining deep in the tradition of the modern jazz guitarist. Included is the first studio recording of Broom's "D's Blues," a live video of which has been a fan favorite online for several years.

"I purposely waited to make a record of all originals," says Broom. "I feel that can be sort of a run-of-the-mill thing to do -- that everyone is doing it. But, you know, I've been out here 30 years now and people need to know who I am beyond my guitar sound and style. This album reveals more of me."

"In my twenty years of playing with Bobby," says bassist Carroll, "I've always felt that his style of playing melds the feelings of all-American blues with an urban hip soulfulness that really speaks to the progression of jazz."

"B is one of the great guitarists and musicians of this generation," adds drummer Watkins. "Playing with him and this trio has meant so much for my development and prepared me to have intelligent musical conversations."

For the last two years, Broom has also been working with the young drummer Makaya McCraven, who is heard on three tracks of the new CD. Playing with Bobby, says McCraven, "you always have to dig deeper. His depth in vocabulary allows the music to go anywhere with ease."

The CD cover photo was shot on 95th Street and West End Avenue, a very short walk from Broom's childhood home at 95th and Columbus. Though Broom, 51, has now lived over half his life as a Chicagoan, he was born in Harlem and raised on the Upper West Side. He attended the High School of Music and Art, made his Carnegie Hall debut at 16 with Sonny Rollins, and debuted as a leader on record at 21 with Clean Sweep (GRP). Broom remains a New Yorker at heart.

The move to Chicago came in 1984, after which he continued to tour with Rollins (1982-1987, 2005-2010), joined forces with Kenny Burrell & the Jazz Guitar Band, played briefly with Miles Davis, and performed and recorded with local leading lights such as Charles Earland.

"Broom has one of the few truly recognizable styles among modern guitarists, and one of the most satisfying solo concepts in mainstream jazz," critic Neil Tesser has written in the Chicago Examiner.

After recording the all-star blowing session Modern Man in 2001, Broom commenced his series of trio albums with Stand followed by Song and Dance (which Pat Metheny called "one of the best jazz guitar trio records I've ever heard"), The Way I Play, and 2009's Plays for Monk. He also remained busy with the Deep Blue Organ Trio, the group he has co-led with Chris Foreman and Greg Rockingham since 2000. Their fourth album Wonderful!, a Stevie Wonder tribute, was a #1 JazzWeek album shortly after its summer 2011 release. Deep Blue has toured as Steely Dan's opening act on several occasions in recent years.

As jazz finds itself in a more academic period ushered in by programming and institutions, Bobby Broom and his trio(s) continue to operate from jazz's natural standpoint -- the black music aesthetic in rhythm and the blues, and the distinctly urban-American-influenced jazz strain that continues to thrive and evolve from each generation to the next via recordings and tutelage on the stage. Broom and his bandmates have come by their perspective having worked with many of jazz's Golden Era legends, who taught that listeners will respond to music they can understand and feel.