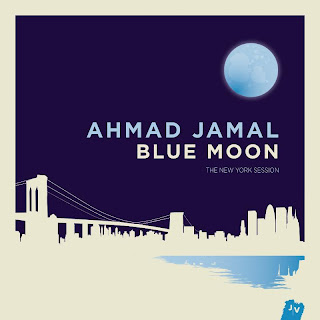 Blue Moon is not just celebrated pianist-composer Ahmad Jamal‘s latest album, it’s his current masterpiece, suffused with a predominant feeling reminiscent of his greatest periods with Chess and Impulse! Records.

Comprised of brilliant new interpretations of songs from two of America’s most storied mediums of entertainment (classic films and Broadway) and originals that convey pure majesty, each of the nine pieces showcases Jamal’s creative reinvention of swing, provides a pretext for breathtaking melodies, and showcases sophisticated ensemble interplay with his new working group.

In regards to cinema, Jamal’s roots run deep. When he was younger, he used to be a movie aficionado. “I would occasionally watch several films a day,” he states. Jamal sees music and film as closely related bodies. In fact, his own music was even used in the 1995 Clint Eastwood film, The Bridges of Madison Country.

Jamal reflects, “Music plays a central role in cinema. That is the very reason why generations of great composers and arrangers dedicated themselves to this art: Johnny Mandel, Quincy Jones….even during the silent era, pianists were in demand.” That respect and understanding of the interconnectivity between music and film – from a composition standpoint – is clear on Blue Moon through the album’s repertoire.

The title track, a song popularized by the like of Billie Holliday, Mel Torme and even Elvis Presley, was actually written in 1934 for the MGM film Hollywood Party. Jamal knows its very depths. “I used to play it a lot when I was a child, in private. It is the first time I am putting it on an album.” Jamal offers a most expansive and comprehensive version of the composition.

“Blue Moon” is not the only composition drawing from the world of film. He revisits “Invitation,” a song from the original soundtrack of A Life of Her Own, the 1950 George Cukor movie. Jamal’s interpretation of the composition gives the adopted jazz standard new meaning, featuring an infectious groove underneath Jamal’s distinctive approach to the melody. In the same vein, though in solo format, Jamal reinterprets “Laura,” the Johnny Mercer classic that gave its title to the 1944 Otto Preminger masterpiece (a song that he considers to be “one of my favorites”).

Just as other jazz musicians have often transfigured popular Broadway shows over the years, Jamal showcases his version of “This Is The Life,” excerpted from Golden Boy, a 1964 success that featured Sammy Davis Jr. Without erasing its original melodic energy, Jamal draws original obliques with the strength of his personal, sensual approach to the keyboard.

Such a ubiquitous gift allows the pianist to prove in turn allusive and even more expressive on “The Gypsy,” another borrowing from the popular songbook repertoire, and which has become a standard since Charlie Parker recorded the composition 1946. As far as “Woody’n You” is concerned, it is one of Jamal’s “go-to” classics. “My first version appears on the ‘Live At Pershing.’ It was an enormous success. I have been playing those pieces for a very long time.”

In addition, he added three compositions of his own: “Autumn Rain,” already recorded, but presented on Blue Moon in completely different form, “Morning Mist,” and “I Remember Italy,” which underlines the empathy he has for that country. On the latter, Jamal draws a musical novel, full of bright colors reminiscent of the most important painters (a track that channels the impressionistic classical music period of Claude Debussy and Maurice Ravel). “I am often influenced by the cities I travel through, to which have been many. But Italy really has a peculiar flavor. Traveling is good for me, even if my favorite city is home,” Jamal is in tune with a world, “so vast one will never be able to see it all, but one should do everything in his/her power to make it a better place.”

For the album, Jamal surrounded himself with a renewed team: three impeccable guardians of the tempo in bassist Reginald Veal, drummer Herlin Riley and percussionist Manolo Badrena. Veal, whom has made a name and a sound for himself with the likes of Wynton Marsalis and Joshua Redman, is a younger musician, yet provides the group with a rock solid foundation. On one side of the group sits Riley, whom after spending years of work on the New York scene recently came back to work with the pianist [Jamal] who got him started in the mid-1980s. On the other side sits Jamal’s old friend Badrena, a percussionist who was part of Wayne Shorter and Joe Zawinul’s Weather Report in the mid-to-late 1970s.

Jamal is not just a living legend of jazz; he is one of the most inspired and inspiring artists in music today. An important and influential figure in jazz history (he was a key influence on Miles Davis in his formative years, and countless others), he introduced the concepts of space, silence and dramatic dynamics into jazz performance. He continues to influence a diverse generation of artists from Herbie Hancock, Hiromi to Matthew Shipp. Renowned critic Stanley Crouch considers Jamal’s distinctive style as having an influence on the same level as “Jelly Roll Morton, Fletcher Henderson, Duke Ellington, Art Tatum, Count Basie, Thelonious Monk, Horace Silver and John Lewis, all thinkers whose wrestling with form and content influenced the shape and texture of the music, and whose ensembles were models of their music visions.”

In reflecting on the overall album and group’s chemistry, Jamal states, “Recording an album is like playing on stage. All together and most importantly not isolated in our booths. There is no secret: it is a very human matter.” This organic interaction is clear on the album.

At 81 years old, with Blue Moon, Ahmad Jamal is at the peak of his art.

ahmadjamal.com
Posted by Jazz Chill at 8:28 AM