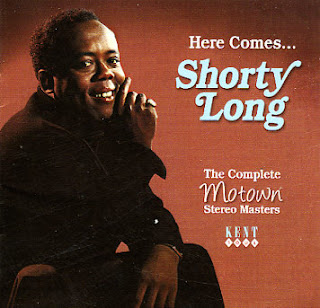 The 2 fantastic albums Shorty Long cut for Soul/Motown – '68's funky Here Comes The Judge & '69's soulful Prime Of Shorty Long – a perfect pair, put together with 2 bonus tracks and great notes by the rare soul-reverent heroes at Kent UK! The CD kicks off with the Here Come The Judge – a fantastic album of funky soul – actually only one of two albums he cut – and the only one that was issued before his untimely early death – a killer batch of tracks that mix together funk, Detroit soul, and a great sense of humor! The album kicks off with Shorty's hit single "Here Comes The Judge", a funky musical version of the "judge" routine that had been knocking around the Chittlin Circuit comedy scene for years, particularly in the work of Pigmeat Markham. The album also features Shorty's legendary "soul party" cut, "Function At The Junction", plus lots of other tasty numbers like "Night Fo Last" (done in vocal and instrumental versions)", "Here Comes Fat Albert", "Stranded In the Jungle", "Don't Mess With My Weekend", "Ain't No Justice", and "Sing What You Wanna".

The Prime Of Shorty Long is a beautiful album from Shorty – issued shortly after his early death from drowning at the age of 29 – and an amazing document of the mighty soul powers he would have had in years to come! There's a depth here that Shorty never had before – a sense of power and righteousness that comes through not just in the vocals, but in the construction of the songs as well – very tight, with a musical vision that shows a sense of pride and power that was never present in Long's earlier singles. Paul Riser handled the arrangements, in a way that really illustrates that cresting Motown intensity at the start of the 70s – and titles include "Whiter Shade Of Pale", "Baby Come Home To Me", "When You Are Available", "The Deacon Work", "Give Me Some Air", "I Had A Dream", and "I Wish You Were Here". CD also features 2 bonus tracks – "Mobile Lil The Dancing Witch" (previously unissued stereo mix) and "Chantilly Lace" (previously unissued stereo alternative version). ~ Dusty Groove