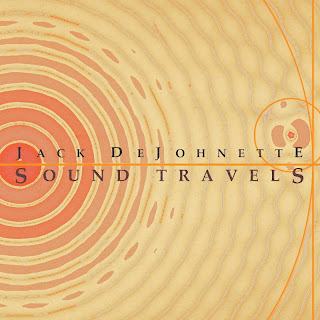 2012 promises to be a banner year for legend Jack DeJohnette, renowned as one of music’s most adventurous artists and prolific drummers. He’ll receive a National Endowment for the Arts Jazz Master Fellowship, the highest U.S. honor for jazz musicians. The Chicago-born, New York-based artist will also turn 70, boasting a top-drawer historical resume that ranges from his early days as a charter member of the Charles Lloyd Quartet and his seminal drumming in Miles Davis’s pioneering fusion band in the late ’60s and early ’70s (including Bitches Brew) to his longstanding quarter-century-plus contributions to the Keith Jarrett Standards Trio as well as his own diverse solo career recording for such labels as ECM, MCA/Impluse!, EMI/Blue Note, and his own imprint Golden Beams.

Add to that another crowning achievement: DeJohnette’s latest and arguably best album, Sound Travels (a co-release between Golden Beams and eOne). It’s a superb genre-spanning, nine-song collection that grooves with Latin rhythms and West Indian energy, muses with meditative tunes, and buoys with straight-up jazz swing. Sound Travels features an array of collaborators, including vocalists Bruce Hornsby (on the funky, bluesy tune “Dirty Ground” that has AOR hit potential), Bobby McFerrin and Esperanza Spalding. Also on board are emerging talents such as trumpeter Ambrose Akinmusire and guitarist Lionel Loueke (and Spalding, who plays bass on seven of the tracks) and established jazz stars such as saxophonist Tim Ries, percussionist Luisito Quintero and, on one track, pianist Jason Moran.

But DeJohnette is the spotlighted star of the album. He composed all of the tunes (he co-composed “Dirty Ground” with Hornsby, who wrote the lyrics), he drums with his distinctive and passionate style, and he plays the piano (his first instrument on which he studied classical music from the age of 4 to 14) on nearly all the tracks, including the lyrical solo bookends.

DeJohnette’s goal for the album was simple: “I love to play grooves and beautiful melodies,” he says. “It was fun once we got started. It was like, let the juices flow.”

Given his Jazz Master award and his significant birthday, DeJohnette made plans to do something special for 2012. To help plot the course, he sought out his longtime industry friend Chuck Mitchell at eOne, whom he’s known for over 40 years, to discuss ideas. “We talked about people who could play on the album,” says DeJohnette, “but Chuck was also firm that I play piano as well as drums. I’ve made a few piano albums in my career, and he likes them. I enjoy playing the piano. I love the melodies and harmonies, the way the piano sounds and the touch. I loved it.” (Moran was originally slotted to play more than one number, but DeJohnette says, “As things developed in the studio, I felt so comfortable on the piano that it just worked its way into the fabric of nearly all the songs.”)

While Mitchell serves as executive producer of Sound Travels, DeJohnette enlisted the services of Robert Sadin as the album’s producer. “When Chuck and I talked about the album, I told him that I liked the intuitive way Bob worked on albums by Sting and Herbie Hancock,” DeJohnette says. “Bob also helped me think through the players on the album. For example, I knew I was going to use Ambrose. But we both felt that we needed another horn voice, so we thought of saxophonist Tim Ries, who is a fine jazz composer and has worked with the Rolling Stones. He was in Budapest at the time, so I called him and it happened to be his birthday. I told him I had a record date, and he arrived the next day jetlagged. Even so, he really took care of business.”

DeJohnette wrote most of the music last July when he was touring Europe with Jarrett’s trio. “I had a [Korg] M3 keyboard on which I wrote sequences and played around with arrangements,” he says. “Bob would check them out, and he was excited.”

DeJohnette also wanted to focus on vocals for some of the tracks. The first of the album is from Spalding, whom DeJohnette had met via Hancock and later contributed three tracks to on her Radio Music Society album. “It was Bob’s idea to have Esperanza sing,” he says. “It wasn’t planned that way. But she was gracious enough to go along. Because of the creative environment in the studio, Bob asked Esperanza to improvise over the chord changes of the first solo section on ‘Salsa for Luisito.’” The Latin-jazz-infused song is DeJohnette’s salute to his percussionist Luisito Quintero, whom he met via Danílo Pérez. “I can count on Luisito,” says DeJohnette, “and he can play anything. We play a drums-timbales call-and-response section.”

The second vocal track comes courtesy of singer-songwriter Hornsby, who had enlisted the drummer for his 2007 trio jazz album, Camp Meeting, with Christian McBride. After hearing one of DeJohnette’s instrumentals in 7/4 time, Hornsby asked him to send the music. The result: the Band-like “Dirty Ground” that Hornsby sings. “I love the groove of that song,” DeJohnette says. “It reminds me of Levon Helm, who lays a funky groove. For those kinds of grooves, he’s my favorite drummer. So Bruce wrote the lyrics partly about New Orleans and Mardi Gras, but there’s also a nod to Levon.”
DeJohnette also singles out Loueke’s contributions to the tune. “He’s a master of understatement,” he says. “I had the opportunity to work with him before, and I enjoyed it. But on ‘Dirty Ground,’ he knocked me out with the way that he played in a Delta blues style.”

The final vocal number features McFerrin’s wordless singing on the haunting “Oneness.” “Bobby just came in and sang the melody,” says DeJohnette. “And then we agreed to do a call-and-response section. Bobby is amazing in his ability to improvise.”

Another top-tier tune in the collection is DeJohnette’s tribute to Sonny Rollins, “Sonny Light,” a dancing tune steeped in West Indian rhythms. “I played this for Sonny and he was touched,” DeJohnette says. “He likes calypsos. Originally I wrote this on my keyboard, but I wanted to get Lionel’s nylon-string guitar to sound like a kora. It reminded me of something that Sonny might play.”

DeJohnette also took the straight-ahead jazz path for two tunes, including the swinging “New Muse,” which features Ries on soprano sax and the leader displaying his trademark vitality on the drums. “Ambrose was great on this track,” he says. “I just love his melodic and harmonic solos. I love his sound and his ideas.”

The second jazz-oriented track, “Indigo Dreamscape,” is a gentle groove with an angular melodic architecture and a fine trade between Moran and Ries on tenor sax toward the end. Originally recorded by DeJohnette on his 1990 Parallel Realities album with Hancock and Pat Metheny, the leader decided to make a new arrangement that included Spalding’s bass and the horns. Also in the middle of the album, serving as an interlude of sorts, DeJohnette delivers the title track, joined by Loueke, Spalding and Quintero.

The beginning and conclusion of Sound Travels features DeJohnette on solo piano. “Enter Here” is a meditation and welcome with a resonating bell punctuating the end, while “Home” is a slow celebration. As for going it solo, DeJohnette says, “Why not? That way I cover all the bases. ‘Enter Here’ is a neutral song, inviting the listener in for a journey through the rest of the album, and ‘Home’ is an improvisation that’s like church. It’s like the 1-4-5-1 chorus you hear in South African music, which reminds me of Abdullah Ibrahim, who is one of my favorite pianists. I played it in the studio and Bob said, ‘It sounds like home,’ hence the title.”

Just like most of the tunes on Sound Travels, the piano solos are both brief. “Nothing goes on too long on this album,” DeJohnette says. He proudly adds, “I wanted to make something that would make people move, to make them relax and forget their troubles. I wanted to bring a smile.”