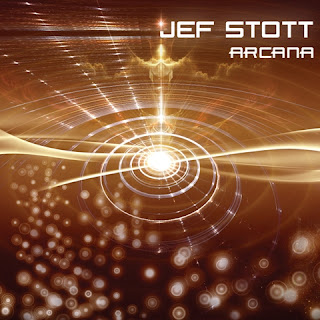 Jef Stott has been deftly navigating the realms of world fusion music for over a decade, where he has consistently been at the forefront of the International Global Bass movement. His sound is a conscious inspired blend of the highly articulated electronica compositions fused with the mystery and depth of an inner ethnography. He works and performs with master musicians and dancers from the Middle East, Northern Africa, the Balkans and India. Jef is also a highly accomplished multi instrumentalist adding a live performance element to his live shows with Arabic string and percussion instruments, guitars, bass and live dub effects. As a trained anthropologist, he has made an in depth academic study of the instruments of the Middle East with master teachers including Hamza el Din, Omar Faruk Tekbilek among others. Jeff released a digital-only EP, Souksonik, with Six Degrees Records in 2007, followed by the Arabic-drenched album Saracen the following year.

Arcana, (the title refers to the major arcana of the Tarot), his stunning new full length recording comes to us after Stott suffered a series of recent setbacks: the end of a long-term relationship, losing a career job and having his apartment broken into. The stolen objects included all of his computer equipment, including the hard drive in which the two-month old Arcana lived.

“I just went back into the studio and made this album,” he says “It’s about reclaiming my place in the world, and bringing really powerful female energy back into my life.” Stott knew that life is circular. His upswing awaited.

Jef sums up the scope and power of his new project best when describing his motivations behind the music. “The album is meant to be an imaginary soundtrack to an epic adventure film set far in the distant future. Behind it all is a really strong athletic female goddess with a huge sword in her hand. She’s a warrior of light. She’s always strong and compassionate, but she knows how to use her sword.” ~ Six Degrees Records
Posted by Jazz Chill at 4:22 PM