BILL EVANS LIVE AT ART D'LUGOFF'S TOP OF THE GATE 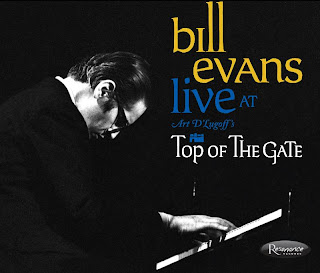 With Live at Art D'Lugoff's Top of the Gate, Resonance Records offers listeners a table at the front of the stage for a stellar performance by one of jazz's greatest trios. It's October 23, 1968 in Greenwich Village, and legendary pianist Bill Evans is joined by bassist Eddie Gomez and drummer Marty Morell for two top-notch sets, represented here in their entirety. Aired only once, on Columbia University radio station WKCR-FM, this concert hasn't been heard for more than forty years and has never been released in any form.

"This gives people a good idea of what it must have been like to be in the room at the time and experience the music," says producer Zev Feldman. "We've done everything short of building a time machine."

The credit for the recording's remarkable clarity and intimacy rests entirely with George Klabin, then a 22-year-old recording engineer granted unprecedented access to the date by Evans' longtime manager, Helen Keane. Jazz fans can be forgiven for being skeptical after countless long-lost jazz recordings have hit the market only to sound as if they were transmitted over the telephone via a bad connection on a stormy night. Klabin, however, conscientiously positioned separate microphones on each member of the trio, yielding a pristine mix that's the next best thing to being there. This is, quite possibly, the best-engineered and most gorgeous-sounding live recording ever made of Evans.

"Being able to hear jazz up close, as I did in clubs, I was dismayed by what I heard on live recordings," Klabin recalls. "The sound was so often muddy and distant and not satisfying. I wanted to capture the intimacy."

The benefits of Klabin's approach can be heard from the first notes of Evans' delicate introduction to "Emily," which ring out with a hushed brilliance while the gentle murmur of diners can be heard unobtrusively in the background. "This release celebrates the memory of Bill Evans," Feldman says, "but it also celebrates the memory of Art D'Lugoff, who was a visionary and obviously one of New York's greatest music impresarios, and the Village Gate as well, which sadly is no longer with us either."

D'Lugoff opened the Village Gate in 1958, followed by the upstairs club, Top of The Gate, a few years later. The Greenwich Village establishments thrived for the next three-and-a-half decades, hosting not only the era's most influential figures in jazz but rising stars in folk music, world music, blues, and comedy, as well as off-Broadway shows. Just to give some idea of how central the Gate was: at the same time that Evans, Gomez and Morell were treating the audience upstairs to the music you're listening to now, patrons downstairs were thrilling to the sounds of Thelonious Monk or Charles Lloyd, whose quartets were sharing the stage that week.

Despite that monumental double-bill, however, the evidence we now have proves that it would have been difficult to top the show being put on by the Evans trio. At this time, Gomez was two years into what would become an eleven-year stint in the trio, while Morell had joined the group literally the same week the show was documented. The trio had quickly found its footing, however, playing at the height of their powers individually and collectively. For proof, look no further than the extended drum/bass interaction on the second disc's "Autumn Leaves."

Throughout the two sets, Evans showcases his gift for interpreting standards, playing only one original ("Turn Out the Stars") over the seventeen tracks. "My Funny Valentine" moves effortlessly from tenderness to passion, while "Gone With the Wind" erupts at a breakneck pace and "Here's That Rainy Day" concludes the evening with heart-breaking emotion.

Students of Evans' music will be delighted to see that three pieces ("Emily," "Yesterdays," and "'Round Midnight") are represented in both the first and second sets, offering a rare opportunity to compare the soloists' diverging takes on the same tunes in a single evening. Also, as Feldman points out in his notes, several of the selections possess historic significance: both "My Funny Valentine" and "Here's That Rainy Day" (and possibly "Mother of Earl") mark Evans' first documented trio performances of those songs, while "Here's That Rainy Day" may be the first time Evans recorded that piece period.

In addition to offering this vital concert for the first time, Feldman and Klabin have labored to surround the music with important context, assembling a package rich with photographs, information and reminiscences. Both Gomez and Morell offer heartfelt reflections of their time with Evans, while Klabin explains his methods in enlightening detail and Raphael D'Lugoff looks back at growing up in his father's legendary venue. A younger Raphael can be seen in a family photo alongside his father and sister Sharon, one of several historical documents included in the package, which also features memorabilia from the club and the actual contract for the week signed by Evans. D'Lugoff also provided a picture of the bustling street scene outside the Gate from the 1960s.

The liner notes also include an essay by pioneering jazz critic Nat Hentoff, an appreciation by the great vibist Gary Burton. These notes are lined with iconic photographs by Jan Persson, Raymond Ross, Herb Snitzer, Fred Seligo, and Tom Copi, whose striking cover image is graced by the original logo from the Top of the Gate sign.

The album will be available in a 2-CD deluxe digi-pack with a 28-page booklet. Additionally, a limited first-edition pressing of 3,000 hand-numbered 3-LP 180 Gram vinyl box sets will be made available, pressed by Record Technology Incorporated (R.T.I.), including a 4-panel booklet featuring the same content as the CD booklet. This edition was pressed at 45 RPM for optimum sound and mastered by Bernie Grundman. The entire package will also be downloadable with an e-booklet (where available) for those who choose to purchase the album digitally.

Resonance Records has chosen to participate and show support as an independent label for Record Store Day (April 21) by exclusively releasing a limited edition pressing of 1500 units of a 4 track "Selections From Top of The Gate," 10" record, pressed by Rainbo on cobalt blue-colored vinyl at 33 1/3 RPM.

Live at Art D'Lugoff's Top of the Gate follows Resonance's release earlier this year of Echoes of Indiana Avenue, a landmark collection of previously unreleased recordings of guitar master Wes Montgomery. Together, the two collections cement the label's place at the forefront of both new and archival jazz. "Our mission is both exposing deserving living talent and preserving the great jazz of the past," Klabin says. "We look to capture moments that are seminal or important in the career of the musician and in the history of modern jazz, so this is a perfect example."

For Feldman, the opportunity to work on not only a Bill Evans release but a recording from this particular era has been a dream come true. The producers' introduction to Evans' music came courtesy of the pianists' work with this particular group, featuring Gomez and Morell. "This is something very personal for me because it was one of the first groups of Bill's that I had a love for," Feldman says. "I'm just so grateful to George that he took the initiative to document these performances, and it's just incredible that it's been tucked away for all these years and has stood the test of time."