MIKE STERN - ALL OVER THE PLACE 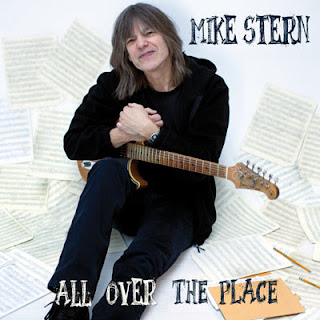 Since his days with Blood Sweat & Tears in the mid-1970s, followed by stints with Billy Cobham and Miles Davis’ band in the ‘80s, and a solo career that now spans more than 25 years, guitarist Mike Stern has used his jazz roots as a starting point for exploring a range of alternate territories that include R&B, rock, swing, funk, world music and numerous other regions along the musical topography. The recipient of Guitar Player magazine’s Certified Legend Award for 2012, he’s an artist who’s not afraid to bring numerous styles and ideas – however diverse – into the same place just to see what happens.

All Over the Place is Stern’s new recording on Heads Up International, a division of Concord Music Group. Set for release on June 19, 2012, the 11-song set aligns the characteristically diverse and adventurous guitarist with a cadre of brilliant guests, including trumpeter Randy Brecker; saxophonist Kenny Garrett; and drummers Dave Weckl, Keith Carlock and Lionel Cordew. Also on hand is a delegation of high-caliber electric and acoustic bass players: Esperanza Spalding, Richard Bona, Victor Wooten, Anthony Jackson, Dave Holland, Tom Kennedy, Will Lee and Victor Bailey.

“I’ve been playing a lot of different kinds of great music with a lot of different musicians on some of my more recent records,” says Stern, whose Big Neighborhood – released on Heads Up in 2009 – followed a similarly eclectic vibe. “I love bebop, swing, rock, all the stuff that a lot of guitar players – especially jazz players – tend to include in their music. It’s the nature of the instrument, but very much a part of my nature as well. There’s a lot of music that really inspires me, and it usually covers quite a few territories.”

Leni returns a couple tracks later on “Out of the Blue,” this time playing an exotic three-stringed Malian instrument called a n’goni. Her opening riffs segue into the high-powered free-for-all featuring Brecker, Beard, Kennedy, Keiper and drummer Kim Thompson.

A tempo changeup comes in the form of the much leaner and quieter “As Far As We Know,” featuring Spalding on bass and vocals. “I like drama,” says Stern. “I like a lot of dynamics. I like music that has a lot of heart, and I hope this priority comes through in my playing and in my writing, especially on this tune.”

Stern is joined by drummer Al Foster on three engaging songs that land squarely in the center of the album: the funky and swinging “Blues for Al,” the energetic and colorful “OCD,” a song loaded with solo work by Stern and Garrett; and the much more understated and reflective acoustic piece, “You Never Told Me.”

The mellow groove of “Flipside” throws the spotlight on saxophonist Bob Malach, who joins Stern in some solid solo work. Malach is back for the title track, which closes the set on a fiery note as Stern leads a groove that’s reminiscent of his high-energy collaborations with the Brecker Brothers in the early ‘90s.

Stern is ready at a moment’s notice to go to all of these places and more, and he’s ready and willing to bring anyone along for the ride. “Music, to me, is a language of the heart,” he says. “I hope people will get some emotional payoff from what I’ve done on this recording. That’s the vibe that I continue to go for with all of my music.”
Posted by Jazz Chill at 9:38 AM