CARMEN INTORRE - FOR THE SOUL 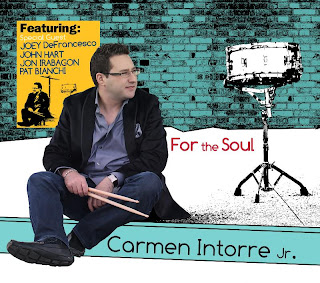 Drummer/Percussionist Carmen Intorre is pairing up with producer Bob Belden on his debut album For The Soul (Random Act Records); the organ-based session covers a wide range of musical stylings from Stevie Wonder and Steely Dan to Chick Corea and Weather Report. Intorre is joined by John Hart on guitar, Jon Irabagon on alto and tenor sax, and Pat Bianchi and Joey DeFrancesco - two of the world's most formidable jazz organists. The album swings within the tradition while expanding upon the vocabulary and boundaries of the idiom.

Currently Intorre performs with legendary jazz guitarist Pat Martino, touring extensively throughout the world with the guitarist's organ trio. He is always eager to uncover the latest information about music and drumming and to share that information with others. He states, "This is my job. I have to give back what I was given a chance to do." He goes on to explain, "Music is an opportunity for me to give up my soul, while in the process connecting with the audiences' souls as well. I want the musicians on the bandstand and the members in the audience to feel uplifted after a performance, to feel great about themselves through the experience that they encountered. That is what For The Soul is all about."

The opening track, Stevie Wonder's "Too High," sizzles with intensity. Along with the leader's backbeat, Bianchi's funky bass line and Hart's strumming sets up a compelling groove. Everyone solos with aplomb, with Hart rocking out, Bianchi displaying harmonic depth and Irabagon illustrating how and why he won the prestigious Thelonious Monk Competition in 2008. Of course, Intorre makes his own joyous statement while driving the arrangement to its conclusion.

Gene Perla's "Tergiversation" is a seldom-performed gem. Intorre's version features the organ tandem of DeFrancesco and Bianchi. Friendly fireworks ensue as the two masters solo and trade statements; the fire escalates as they trade fours with the leader's thoughtful drums. This is an organ-lover's dream.

The Chick Corea opus, "Steps" is rendered by Intorre, Bianchi and DeFrancesco. Few organ groups could handle this tricky composition, let alone perform it at a breakneck tempo. These three navigate the time and changes in a romp, with Intorre taking his longest solo on the album. Producer Belden contributed "Carmen's Caddie," his homage to Intorre's ride of choice. A boogaloo out of the McDuff tradition, the quirky melody leads to solos from Hart's clean lines, Irabagon's throaty tenor and a master class in the blues from the irrepressible DeFrancesco.

The album progresses with an homage of a different sort: Joe Zawinul's tribute to Mr. Adderley, "Cannonball." Intorre leads the group with soothing percussion, DeFrancesco delves into his Weather Report vibe, and Bianchi contributes keyboard textures. The ballad tempo still cooks, with Intorre piloting the ensemble to soaring flights. Everyone pays their own heartfelt testimony to Cannonball - However, perhaps the most heart is displayed on the drummer/leader's own tune, the gorgeous "Only One." Inspired by the wisdom, courage and beauty of the drummer's deceased mother, Joan, the beautiful melody is underpinned by sophisticated harmony. Everyone does Mrs. Intorre proud:She surely smiled down upon the entire session.

More soulful sounds emanate from Big Chief Donald Harrison's "Good For The Soul," as Irabagon features his alto for the only time. Swinging from the jump, the happy melody is as sunny as Intorre's big beat. His joyful countenance is also felt on Freddie Hubbard's "Gibraltar," as DeFrancesco takes over the organ again and is provoked by the soul/funk influences to quote from Parliament Funkadelic.

Another unique tune choice, "Josie," is far different from the original Steely Dan version. This Josie is on the corner, maybe a bit too high, but still ready for anything. With Hart's rollicking opening guitar riffs to the free conversation that ensues, the tune is a highlight of modernity. Towards the end, Intorre absolutely raises the roof - the musicians evoke memories of Tony Williams' Lifetime. The album's closer is a flag-waver for the soul. Weather Report's "Black Market" struts with pure ingenuity, prompting a howl from an exuberant DeFrancesco, who wails with impunity as Irabagon does Shorter. Intorre drives it home, ending abruptly on the stately melody.

A 2011 GRAMMY® nominee for his performance on the critically acclaimed album by Joey DeFrancesco entitled Never Can Say Goodbye: The Music of Michael Jackson, Intorre also had the pleasure of performing alongside DeFrancesco and Dr. Lonnie Smith on the PBS show Legends of Jazz, hosted by Ramsey Lewis. "Carmen is one of my favorite drummers; he has a very wide groove and strong beat, and most of all he swings his ass off! I love him!" says DeFrancesco.

Perhaps one word best describes Carmen Intorre and his music: Joy. Reminiscent of Billy Higgins, Intorre brings a palpable swing and drive to virtually all the tracks, making this a palatable musical feast "for the soul."

Random Act Records' motto "Great Music for the Greater Good" adheres to Carmen's philosophy of "giving back." The label donates 10% of all proceeds to charities.