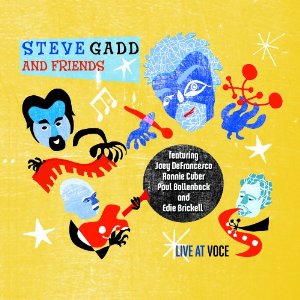 One of the most recorded drummers of all time, Steve Gadd has worked with everyone from Chick Corea to Paul Simon, Maynard Ferguson to Eric Clapton. When it comes to his own projects, Gadd loves to play good-time groove music that has the danceable qualities and bluesiness of the best R&B along with the adventurous solos and impeccable musicianship of jazz. On Live At Voce (Deluxe Edition), Gadd is joined by Joey DeFrancesco (arguably the World's greatest organist), the passionate baritone-saxophonist Ronnie Cuber, and the versatile guitarist Paul Bollenbeck. Together they create grooves and hard-driving swing that are reminiscent of the best organ groups of the 1960s including an early George Benson band that featured Cuber. The infectious rhythms, catchy material, and colorful ensembles make this band impossible to resist.

For this project the quartet, which has been together since 2007, is heard at a popular club in Scottsdale, Arizona. “Watching The River Flow,” which is based on “Swanee River,” has exciting solos by all four musicians. The one-chord vamp “Way Back Home” gives Ronnie Cuber a chance to preach on his horn. “Undecided” is taken at a burning tempo that is perfect for the musicians, with DeFrancesco showing why he is considered the master of his instrument. “Bye Bye Blackbird” starts out with a surprising duet between Gadd on brushes and DeFrancesco, who is heard on a muted trumpet a la Miles Davis. “Them Changes” finds the group rocking out on an R&B groove that alternates with some furious straight ahead jamming. Cuber is featured on a heartfelt rendition of “Georgia On My Mind.” “Back At The Chicken Shack” has the Gadd band returning to the blues, really digging into the music. Horace Silver's “Sister Sadie” is given quite a ride by the musicians, with this being the most stirring performance of the heated set.

As a bonus, the deluxe version of Live At Voce concludes with a pair of intriguing duets (“Here I Am Now” and “Down”) by Gadd and singer/songwriter Edie Brickell. Gadd and Brickell lead the newly formed band, The Gaddabouts, featuring Andrew Fairweather Low and Pino Palladino. About The Musicians:

Joey DeFrancesco is largely responsible for the Hammond B-3 organ making a comeback in the 1990s. The son of organist Papa John DeFrancesco, Joey began sitting in at his father's gigs when he was just six. He learned from the masters, befriended Jimmy Smith, and toured with Miles Davis right after his high school graduation in 1988. His brilliant playing and enthusiasm led to the organ, which had been neglected in favor of electric keyboards, being restored to its former place of prominence. His success has led to many other young organists entering the scene, but Joey DeFrancesco still ranks at the very top.

Baritonist Ronnie Cuber, whose deep guttural tone is influenced by the late Pepper Adams, has been a major force on his instrument since the 1960s. His stints with the Maynard Ferguson big band and with George Benson made him well known in the jazz world. In recent years he has often been heard with the Mingus Big Band.

Guitarist Paul Bollenback started playing music when he was seven. Originally a rock player, he changed his musical direction after hearing Miles Davis. He has been associated with Joey DeFrancesco off and on since the early 1990s and has also worked with Mark Murphy, Gary Thomas, Ron Holloway, Joe Locke, Houston Person, Geoff Keezer, Jim Snider, Jack McDuff, and Tony Monaco. Steve Gadd's Live At Voce lives up to its great potential, resulting in bluesy music that is both accessible and superbly played by four master musicians.