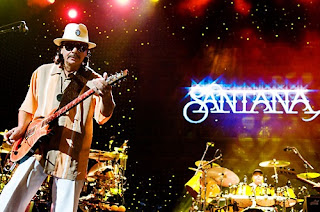 Carlos Santana and the Santana Band will launch the Shape Shifter Tour 2012 with a string of North American dates beginning July 7 at the Grand Casino Mille Lacs in Hinckley, MN. Other highlights include concerts at the Molson Canadian Amphitheatre in West Toronto, ON (7/14), the Bank of America Pavilion in Boston, MA (7/17), and two dates at the Borgata Spa & Resort Event Center in Atlantic City, NJ (7/20-21). More dates to be announced!

Comprising mostly original compositions that Carlos has been setting aside for such an instrumental project, Shape Shifter's specially chosen tracks flow together as the magical sustain of his guitar and the spirit behind every note creates music that defies all cultural and language barriers—the music of Santana. In that spirit, Carlos dedicated the album to Native Americans, acknowledging Australia's 2008 apology to the Aborigines, and President Obama's signing of the 2009 Native American Apology Resolution. He says, "I encourage any and all countries (that have not as yet done so) to acknowledge the first people of their land, and make this a collective global effort."

On the Shape Shifter Tour 2012, Santana will perform selections from the new album, as well as classics from the group's more than four-decades-long career. Also this year, on May 2, Santana begins a two-year residency performing at the House of Blues at Mandalay Bay in Las Vegas.

Since Santana emerged from the San Francisco Bay Area music scene in the 1960s, the group has sold more than 100 million records, reached more than 100 million fans at concerts worldwide, and been inducted into the Rock and Roll Hall of Fame. Santana has won 10 GRAMMYs, including a record-tying nine for a single project, 1999's Supernatural (including Album of the Year and Record of the Year for "Smooth"). With the 2010 release of Guitar Heaven: The Greatest Guitar Classics of All Time­, Santana joined the Rolling Stones as one of only two music acts in Billboard history to score at least one Top Ten album in each decade from the 1960s on. Among other honors, Carlos Santana is #20 on Rolling Stone's list of the "100 Greatest Guitarists of All Time"—"Santana's crystalline tone and clean arcing sustain make him the rare instrumentalist who can be identified in just one note."