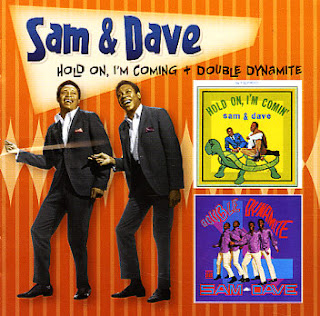 A treasure trove of hard soul classics – two albums by Sam & Dave, with bonus tracks too! First up is Hold On I'm Coming – classic Sam & Dave work for Stax, and a searing batch of hard soul tracks that forever redefined the concept of a male soul duet! This was the sound that put Sam & Dave over the top hard – and which left a generation of similar acts trying to catch up. The album sports a sublime track list of Stax originals – mostly by the Isaac Hayes/David Porter team, plus a few others by Steve Cropper and other writers – all top-shelf work that really helps the pair do their best! Titles include "Hold On, I'm Comin", "You Don't Know Like I Know", "You Got It Made", "It's A Wonder", "Blame Me", "Don't Make It So Hard On Me", "I Take What I Want", "I Got Everything I Need", and "If You Got The Loving".

Double Dynamite is sublime early Stax work from Sam & Dave – the kind of record that forever changed the way the male voice was used in group soul music! The rhythms on the tunes are totally raw – bass, drums, and guitar that are kind of fused into a dirty funky bottom that proves a perfect foil for the leaping vocal mode of the pair – a chunky sort of blend that was one of the boldest new sounds to come out of the Memphis scene of the time. Sam & Dave also get some key support here from another important duo – that of Isaac Hayes & David Porter, who wrote a good portion of tracks on the set, and were no doubt instrumental in the groove! A killer, and the sort of record that changed male duet (and group) singing for generations to come! Titles include "You Got Me Hummin", "When Something Is Wrong With My Baby", "Use Me", and "Sweet Pains" – plus a great cover of "I'm Your Puppet". CD also features 3 bonus tracks – "Goodnight Baby", "Sweet Home", and "A Place Nobody Can Find". ~ Dusty Groove
Posted by Jazz Chill at 8:23 AM