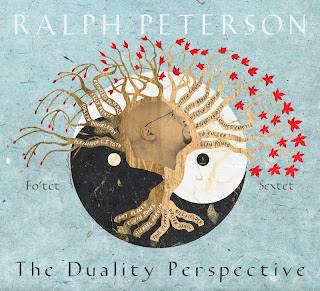 The painting by Edward LaRose that graces the cover of The Duality Perspective, drummer/composer Ralph Peterson's new release and 16th as a leader, is a dynamic illustration of the album's driving principles. The yin yang symbol in the background represents the balance between the two ensembles that appear on the record, the young, next-generation Fo'tet and the more established Sextet. The names of the members of each group are spelled out on the branches of a tree, the Sextet side fully flowering while the Fo'tet side is still budding; the tree's roots are inscribed with the names of elders and mentors including Art Blakey, Elvin Jones, and Bill Fielder.

At the center of all of this is a portrait of Peterson himself, the locus of the enterprise both musically and spiritually. It is Peterson that nurtures this living, growing entity so that buds will bloom, branches will grow and thrive, and roots will delve ever deeper and stronger.

The Duality Perspective thus embodies youth and maturity, past; past, present and future; and diverse stylistic approaches based on a common language. In a bit of word association, Peterson characterizes the young, hungry Fo'tet as "dry ice, so cold it'll burn you," and the all-star Sextet as "richly rooted, one foot in the tradition, the other foot in tomorrow." But as he acknowledges, "Each has a distinct sound and approach, yet they have a commonality at the core."

Of course, as Peterson is quick to point out, there are more than two sides to his musical identity. ("Later on there might be a record called The Multiplicity Perspective," he muses.) Besides his incomparable talent behind the drumkit, which has led to collaborations with the likes of Terence Blanchard, Branford Marsalis, David Murray, Roy Hargrove, Jon Faddis, Michael Brecker, Steve Coleman and Betty Carter over a nearly thirty-year career - not to mention being hand-picked by Art Blakey as the second drummer in the legendary bandleader's Jazz Messenger Big Band until Blakey's 1990 death - Peterson is an agile trumpeter and a respected educator.

Celebrating Peterson's fiftieth birthday, The Duality Perspective is the veteran drummer's 16th album as a leader and the second release on his own Onyx Music label, following last year's acclaimed Outer Reaches. Turning 50, Peterson says, has been accompanied by some positive adjustments in his lifestyle. "These changes helped me to be the best person I can be," he says, "and the best person will always produce the best music. I think this is one of my best records because it very much says where I am right now."

The importance of unifying distinct elements into a distinctive whole springs directly from Peterson's martial arts training. A third-degree black belt and Buddhist, Peterson has studied tae kwon do on and off for more than two decades. "As I continue my martial arts training," he says, "Asian philosophical concepts like yin and yang become more important to me and I'm able to fuse them back into my other artistry, my music art. It also helps me stay physically fit, so I can play with the vigor of my youth but add to it the maturity and wisdom I've gotten through my experiences."

The latter role, in particular Peterson's professorship at Boston's prestigious Berklee College of Music, is well represented in the Fo'tet, the members of which are all current students at the school. Originally conceived in 1989, this serves as an introduction to the band's new incarnation. The new album's "4 in 1" represents a torch-passing, as founding Fo'tet member Bryan Carrott plays marimba alongside current vibraphonist Joseph Doubleday. It has become a mentorship program along the lines of Blakey's talent-fostering Jazz Messengers.

"I treat them like grown folks and I allow them to not be," Peterson says of his role in the Fo'tet. "Musically, when they're demonstrating the measure of how much they have to learn, I don't beat them up for it. I try to share with them similarities that I can find in my own experience."

The growth and replenishment of the album cover's family tree is vividly evidenced by the current membership of Peterson's Sextet, most of whom were in the budding stage themselves when Peterson began working with them. Trumpeter Sean Jones was a student at Rutgers University, who then introduced Peterson to saxophonist Tia Fuller; saxophonist Walter Smith III was a student in one of Peterson's clinics at Berklee prior to his professorship; the drummer taught bassist Luques Curtis and played in the senior recital of his brother, pianist Zaccai Curtis.

The fact that all of them have gone on to be celebrated and in-demand players on the current jazz scene - a testament to Peterson's gift as a talent scout and mentor, a legacy passed on directly from Blakey. It's also an added incentive to keep a close eye on the lesser-known (for now) members of Peterson's younger band.

The Fo'tet receives the honor of the CD's first half, opening with the gritty groove of "One False Move." In his liner notes, Peterson refers to the piece's down-and-dirty sound as "Swunk," a hybrid of swing and funk that perfectly captures its gut-level momentum, propelled by the meaty bass sound of Alexander L.J. Toth. The aforementioned "4 in 1" offers an exotic arrangement of the Monk classic contributed by Indonesian musicians Sri Hanuraga and Elfa Zulham.

The lullaby lilt of "Addison and Anthony," featuring Felix Peikli's winsome bass clarinet, was inspired by Peterson's grandchildren, while "Bamboo Bends in a Storm," honors Peterson's wife Diane and her resiliency of their marriage, characterized by the insistent, driving percussion of Reinaldo Dejesus. The final Fo'tet piece, the joyously darting "Princess," reprises a piece from Peterson's second release dedicated to his daughter Sonora Tiye - now 23 years old.

Tia Fuller's silken soprano opens the Sextet half of the disc with "Coming Home," a piece from Peterson's leader debut that begins to smolder with the addition of the leader and the Curtis brothers. The Afro-Cuban rhythms of "Impervious Gems," penned by Peterson's student Jonathon Pinson, provide a showcase for Sean Jones' agile trumpet and the huge, soulful tenor sound of Edwin "Eddie" Bayard.

"You Have Know Idea" is the album's second tribute to Peterson's wife, this one more seductive and playful. "Like her," Peterson writes of his better half, "the groove is sensual and elegant."

The album's closer, "Pinnacle," corrals the ensemble for a breakneck burner, powered by Peterson's high-octane fuel. As always throughout the album and throughout his career, Peterson refuses to hog the spotlight, but renders himself essential to the overall musicality of the undertaking. "I'm a musician who plays the drums," he says - a simple statement but one, in the spirit of the album's dualistic perspective, that speaks volumes.