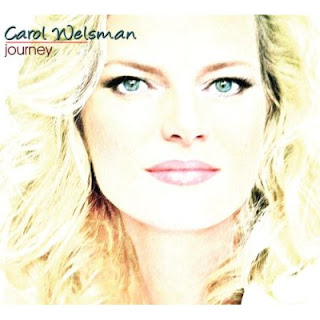 On her highly anticipated tenth recording, vocalist/pianist Carol Welsman invites us to tag along on a spirited yet intimate adventure. She explores 14 classic songs on Journey (Justin Time Records), all inspired by her lifelong love of traveling.

While jaunting from city to city can be somewhat draining for most people, Welsman enjoys the same sense of happy wanderlust that she had the first time she flew to Boston from her hometown of Toronto to attend the Berklee College of Music as a piano performance major. Since then, she has jazzed thousands of fans everywhere from Tokyo and New York to Italy and Brazil; lived for years in France, Italy and Los Angeles; and continues to be an iconic figure in her home country of Canada, where she has received five Juno nominations over the course of her 15 year recording career.

While her rich discography includes numerous acclaimed recordings showcasing her powerful skills as a songwriter, Journey follows in the tradition of Welsman’s previous thematic excursions, including Swing Ladies Swing! A Tribute to Singers of the Swing Era (1999), What’cha Got Cookin’, a set of jazzed up country standards produced by Pierre and Mary Cossette (2005), the Japan-released Benny Goodman tribute Memories of You (2008) and Welsman’s the tour de force I Like Men, Reflections of Miss Peggy Lee, which earned the singer her fifth Juno nod for Best Jazz Vocal Album of the Year in Canada and was named one of USA Today’s Top 5 albums of the year (alongside Barbra Streisand and Mark Knopfler) and #3 album of the year in Jazz Times.

Produced by Welsman’s longtime band members, guitarist Pierre Coté and drummer/percussionist Jimmy Branly, Journey also features Marc Rogers on bass and a guest spot by trumpeter Ron Di Lauro on “You Came A Long Way From St. Louis.” The musical and emotional centerpiece is, as always, Welsman’s piano and a vocal style that goes from sly and witty to seductive and sensual with the clever turn of a phrase or flip of the proverbial light switch. Though most songs are sung in her native English, she draws on her fluency in French for “Volons Vers La Lune” (an exuberant, coolly swinging adaptation of “Fly Me To The Moon”) and the hauntingly eloquent “Si J’étais Un Homme,” and sings Portuguese throughout the first part of a spirited romp through Jobim’s “Samba De Avião.”

The Journey of this extraordinary recording began with a simple suggestion by famed jazz journalist Don Heckman, who over dinner with friends one night casually asked Welsman if she would ever do an album of “travel songs.” She quickly warmed to the idea and started a folder on her computer to fill with suggestions of material-which came over a period of time from many musical colleagues and close friends, including legendary guitarist and Sergio Mendes musical director Oscar Castro-Neves (who produced Welsman’s 2003 Juno nominated The Language of Love) and famed Hollywood Squares host Peter Marshall. As Heckman later wrote in his thoughtful liner notes, “…the prime difficulty lay in having to answer the recurrent question, ‘Oh no! How can I leave that out?’”

The true joy in experiencing the 14 tracks that made the final cut comes not only from hearing Welsman swing a batch of obscure tunes that were new even to her (including “You Came A Long Way From St. Louis” and “Detour Ahead”), but also hearing her explore new harmonic possibilities and create deeper emotional worlds for familiar pop chestnuts like “By The Time I Get To Phoenix” and “On The Road Again.” Welsman takes sly and sensual turns with more obvious choices (“Route 66,” “Two For The Road”) and smartly picks some titles where the traveling is embedded in the lyrics, including “Never Make Your Move Too Soon” (a jazzy romp showcasing Welsman’s dynamic scatting style), Johnny Mercer and Jimmy Van Heusen’s “I Thought About You” and “Where Can I Go Without You”.

There were also a few (originally unintentional) winks back to Peggy Lee with “…St. Louis” and “Where Can I Go Without You,” whose lyrics were penned by the legendary singer. Journey closes with an elegant rendition of her friend Marian McPartland’s “Twilight World,” which Welsman performed as an instrumental piece many years ago in Canada. “She emailed me a song she had written with Peggy Lee and just as an extra item sent me an original lead sheet for ‘Twilight World’ with words,” the singer says. “I always loved the song but had no idea it had lyrics. It was a perfect fit for the new album.”

Beyond the compelling song list and Welsman’s unique interpretations, another fascinating element of this Journey is the fact that every tune was recorded in one or two takes, with the band recording 16 tracks in four days. Welsman prepared for the sessions with pre-production demos and, embodying the true essence of jazz, was open to changing course and improvising when the spirit of the song led the band in a different direction during the rehearsal session before recording. Her idea to drop the drums from “Route 66,” for instance, happened during the first run through the song in the recording studio.

“That’s the great thing about jazz, being open to making last minute changes to make every song and arrangement flow just right,” says Welsman. “I wanted to play with the intimacy of the music, which means there could be a sudden change of attitude, as in ‘Never Make Your Move Too Soon,’ which started out as a straight blues but seemed too forced that way. The result was that we were able to have a nice palette of colors with which to present this special array of songs. One of the key things was vibe. I didn’t want to be too over the top, but more on the quiet side so that you could put it on during dinner and then later it would lend itself to more detailed listening. Because we were drawing from so many sources and influences, I was amazed at the end that everything had an organic feel and was totally cohesive. All the themes connected as if we had somehow planned it that way. Dropping an instrument here and there definitely was part of the balanced approach we took.”
Posted by Jazz Chill at 10:54 AM