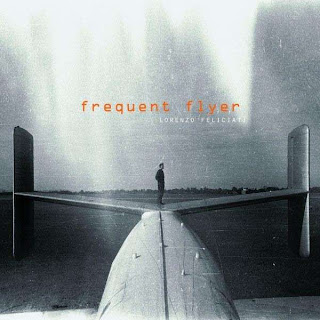 An ambitious blend of jazz, prog-rock and nu-funk, Frequent Flyer is Feliciati’s follow-up to Shizaru, Naked Truth’s 2011 outing on RareNoise. From the ominous-sounding opener “The Fastwing Park Rules,” featuring some urgent tenor sax blowing from Mintzer, to the kinetic “Riding the Orient Express” to the slow-grooving “The White Shadow Story,” Feliciati distinguishes himself as an accomplished, forward-thinking composer and improviser of the highest caliber. His chops showcase, “Groove First,” in which his burning basslines are accompanied by Powell’s Fender Rhodes and La Rosa’s percolating conga work, recalls Jaco Pastorius’ fleet-fingered bass manifesto “Teen Town” (with a brief quote from Jimi Hendrix’s “Power of Soul” along the way). “‘Groove First’ is the song I am most known for,” says Feliciati. “So from this point of view, ‘Groove First’ is my ‘Teen Town,’ but mine is harmonically way simpler, though still pretty complicated to play sometimes, to tell the truth.”

Elsewhere on Frequent Flyer, Feliciati turns in a rousing Afro-Cuban-infused rendition of Wayne Shorter’s “Footprints” with the leader carrying the familiar melody on fretless bass against a propulsive backdrop of drums and percussion. The mournful “Never Forget,” which is underscored by Feliciati’s warm, woody tones on electric upright bass, features the reverb-soaked trumpet work of Vu while the hard-grooving “Gabus and Ganabes” is a showcase for the wonderful violinist Di Cesare. He says the intricate, prog-rock showcase “Law and Order” was jointly inspired by King Crimson and Jeff Berlin. “King Crimson is one of my favorite bands and I always loved the classically influenced stuff that Jeff Berlin did back in the day with Bruford, so I was trying to incorporate some complicated bass stuff with a touch of prog-rock and a bit of classical flavor. There is also a quote from King Crimson’s ‘Red’ in the middle of the song that you might be able to hear.”

The King Crimson influence is more obvious on Feliciati’s cover of their “Thela Hun Ginjeet” (from 1981′s Discipline). “Playing with Pat Mastelotto helped me to discover the magic in some of the most complicated and strange-sounding King Crimson tunes,” he explains. “‘Thela Hun Ginjeet’ was a song I always play at soundcheck, and during a music fair in Italy I did it with my good friends Roberto Gualdi on drums and Guido Block on vocals, and we were all enthusiastic about the way it turned out. So we decided to do it for my album because they are wonderful musicians, very good friends and we play together often. They fit perfectly in the Frequent Flyer format.

This hard-hitting project is a product of Feliciati’s musical journeys over the years. As he explains, “I wanted to do an album with all the wonderful musicians I met during my traveling around for gigs, festivals and sessions. And actually the musicians that are in the Naked Truth band — Pat Mastelotto, Cuong Vu and Roy Powell — had already played on songs for Frequent Flyer before I asked them to form a band. It is strange but during Naked Truth’s Shizaru sessions I never stopped to work on mixing Frequent Flyer, but as soon as the songs were finished I went from one project to the other. It has been a really busy moment of my life but it seems, seeing all the wonderful reviews that Shizaru had and hearing the final result of Frequent Flyer, I think I did a good job.”

Essentially self-taught, Feliciati was drawn to the music of Led Zeppelin early on. By age 14, he gravitated to fretless electric bass after seeing Jaco Pastorius in concert with Weather Report during their Night Passage tour in 1982. “It was the last tour Jaco did with the band and one of my first live concerts. I had heard his first solo album in 1980 but seeing him that night changed my life. I discovered that you could be a bass player and still be the coolest cat on stage. All the eyes of the people in the audience were on Jaco that night. His playing was so powerful and full of joy. As a kid playing a bass, seeing Jaco — in his top form and with the best band ever — was a shock! But in years later, I came to appreciate Jaco for more than just his chops. I still see him first and foremost as a musician and composer. He was a genius in music, not only on the bass.”

By age 20, he was playing blues-rock in clubs around Rome, but off stage he was discovering and analyzing the work of other influential fretless bass players like Mick Karn of Japan, Pino Palladino and Percy Jones along with the great fretted electric bassists Jeff Berlin and Victor Bailey. King Crimson also became a powerful influence on him in those formative years. Feliciati debuted as a leader in 2003 with Upon My Head on Schoots Records and followed up with 2006′s Live at European Bass Day, recorded in Viersen, Germany. He has since appeared at Bass Day conventions in Verona, Italy and Manchester, England, sharing the stage with fellow bass monster Richard Bona, Linley Marthe and Dominique Di Piazza, among others. He has been spotlighted as “Bass Face of the Month” (February 2005) by the International Institute of Bassists and has conducted clinics at the Conservatory of Amsterdam, Rotterdam, Tilburg and the Academy of Contemporary Music of London. Now, with the release of his brilliant Frequent Flyer, Feliciati’s profile should make an incremental leap. As a player, composer and bandleader, he ranks among the heavyweights on the international bass scene.
Posted by Jazz Chill at 8:25 AM