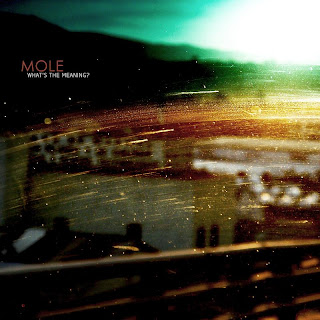 It was nearly eight years ago that Mexican born pianist-composer Mark Aanderud joined forces with Argentinian drummer Hernan Hecht. Their chemistry was immediate and natural. "The first things we did were all related to free music, with electronic elements or not, but always with the idea of creating songs or forms in the moment," says Aanderud. "We do have some incredible magic going on, inasmuch as we can play concerts or record without ever speaking of music, and never repeating ideas or stifling development. This actually hasn't changed over the years."

From their initial encounter, the two kindred spirits progressed to the formation of Mole (pronounced Mo-Lay), an exhilarating quartet that is breaking new ground in its approach to contemporary jazz with their auspicious RareNoiseRecords debut, What's The Meaning?. "I think this project is an inevitable spot in my career," says Hecht, who is also a member of the RareNoiseRecords band Brainkiller. "It is our version of contemporary jazz, the sum of all the things we've heard and experienced in our lives related to jazz and everything else we have acquired; sounds of other music, other arts, the sense of song. It's a freedom of expression, not determined by traditional jazz or directly from any line of traditional language learning. I am interested in music that is broad, not determined by a style."

Though both Aanderud and Hecht would cringe at the prospect of being labeled a fusion band, Mole does indeed fuse a variety of music styles, from jazz and rock to classical, funk and hip-hop. "I don't really like the fusion concept, but of course with all the groove and electronic elements in our music it's natural to think it sounds like fusion a little bit," says Aanderud. "But I see us more in the same line as groups like Phronesis, e.s.t. and Kurt Rosenwinkel and in terms of electronic music, groups like Sigur Rós, Massive Attack and Radiohead."

After a few years of exploring their chemistry together, Aanderud and Hecht began inviting other musicians into their inner circle to see how it affected their music. "We always considered the possibility of working with more people to achieve different characters, sounds and experience new artistic possibilities," says Hecht. "So I instigated tours and recordings with Tim Berne, Rick Parker, Eli Degibri, Jonathan Kreisberg, Marco Renteria, Aaron Cruz and many more musicians, always with the desire of novelty."

For their super-charged What's the Meaning?, Aanderud and Hecht recruited New York guitarist David Gilmore, whose impressive list of credits includes tours and recordings with the likes of Wayne Shorter, Trilok Gurtu, Don Byron and Steve Coleman's Five Elements. "When we decided to tour with someone else from New York, to have new sounds and pressure to work with someone already recognized internationally, someone from which to learn with a shared philosophy and professionalism, we automatically thought of David Gilmore," says Hecht.

Adds Aanderud, "There is probably no other guitarist as diverse in groove, time and the free approach as him. So it was easy to know he was the one we were looking for."

Rounding out the quartet is Mexican upright bassist Jorge "Luri" Molina, whom Aanderud met years ago in their native country. "I've known Luri since I started playing jazz music," says the keyboardist who is currently based in Prague. "We were still kids and we were starting to dig this music. He was a very straight-ahead player but he became one of the most charismatic and strong rhythm players I know, and an incredible musician who just understands any musical situation."

Throughout the course of the eight pieces on this dynamic RareNoiseRecords release, Hecht shifts gears from surging swing to slamming backbeats to driving drum 'n' bass and sensitive, coloristic rubato playing. "My approach to the instrument is completely determined by a lot of different influences, says Hecht, who has resided in Mexico City for the past 16 years. "Many drummers are important in my training, but I'm not one of those musicians who listens only to the instrument they play. What I like is the music and the depth of communication, not just my own instrument. I like the relationship between all the instruments, so it is possible that my playing is more influenced by a pianist than a drummer."

The opener, "PB," begins with free-form textural improvisations before segueing to the cascading theme, played at odd intervals between Aanderud's Wurlitzer electric piano and Gilmore's warm-toned electric guitar. Molina grooves this piece with his steady, full-toned upright bass sound as Hecht plays loosely and melodically around the kit. Gilmore offers remarkably fluid six-string work, showcasing Wes Montgomery-styled octave playing on his stellar solo. Hecht is turned loose at the end of the piece, traversing the kit with boundless energy and a flood of ideas. The hard-hitting "Stones" is fueled by Hecht's kinetic drum 'n' bass pulse while Aanderud layers on classically-inspired lines on grand piano. The moody "Trees And The Old New Ones" opens with Molina's bowed bass setting a droning ambient tone. He is soon joined by guest cellist Dorota Barova, who creates a chamber-like latticework pattern of sound in tandem with Molina's bass. Aanderud reveals his classical roots on this waltz-time number, which is underscored by Hecht's sensitive, swirling brushwork and Gilmore's deliberate, warm-toned guitar lines.

"Flour Tortilla Variation" is a rock-tinged workout marked by Aanderud's forceful piano motif and underscored by Hecht's sizzling drum 'n' bass groove. Gilmore kicks in an aggressive guitar solo that will thrill six-string connoisseurs. The darkly droning title track deals in minimalism while also showcasing the indelible nature of Aanderud's rhythmic hookup with partner Hecht. Mark brings a calming quality with his restrained piano solo while Gilmore elevates the proceedings with rare fretboard abandon, bringing this dynamic offering to a cathartic peak.
"Greenland" is a hypnotic jam featuring torrents of challenging unison lines by Aanderud and Gilmore on top of an insistent groove laid down by Hecht and Molina. Gilmore turns in another distortion-laced solo that adds heat to this throbbing jam and Aanderud follows with a chiming Wurlitzer solo that brings the piece to another level. For the accelerated finale, "Grubenid," Gilmore breaks out some of the taut, odd-metered James Brown-meets-Fela funk lines that he cultivated as a member of Steve Coleman's Five Elements. Hecht feeds the funk with slickly syncopated backbeats as Molina anchors the tune with his bubbling bass groove.

Hecht and Aanderud have made a giant leap in their longstanding partnership on Mole's audacious debut, What's the Meaning?