GARLAND JEFFREYS - THE KING OF IN BETWEEN 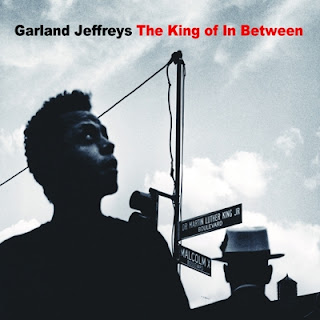 Co-produced by Larry Campbell (Grammy-winning producer with Levon Helm), The King Of In Between marks a return to the more rootsy sounds of Jeffreys’ earlier work. According to The New Yorker, The material is as uncannily fresh and forceful as the songs on his début record, from 1973. The Sheepshead Bay, Brooklyn, native specializes in an endearing snarl over an insistent, sinuous beat, and when he sings “twenty-two stops to the city,” on the new song “Coney Island Winter,” you’re on that train.

Long known for his amazing roster of supporting musicians on every record, with names such as Dr. John, Sonny Rollins, James Taylor, Linton Kwesi Johnson, and Sly and Robbie, The King Of In Between doesn’t disappoint. Among the contributors are Duncan Sheik, with caterwauling guitar on “I’m Alive,” and old friend Lou Reed on the somewhat ironic, insinuating doo-doo-doo backing vocals on “The Contortionist.” “My fourteen-year old daughter Savannah came to the studio and laid down a doubling vocal on top of Lou’s part. I don’t think she understands how cool that really is-yet,” muses Jeffreys.