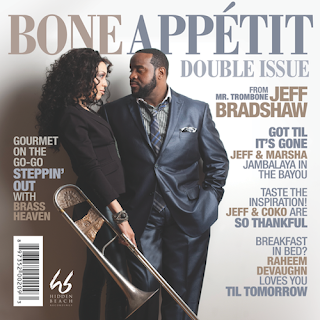 Hidden Beach artist “Mr. Trombone” Jeff Bradshaw will release his sophomore CD, Bone Appétit on April 24, 2012. A blend of jazz, R&B, soul, gospel and hip hop, Bradshaw embarks on a journey creating a fusion of timeless music that colors outside the lines of any one genre. Along with artists like Esperanza Spalding and Robert Glasper, Jeff Bradshaw is among the pack leading the “New Jazz” movement along with his band and the sound of the trombone. Hidden Beach CEO, Steve McKeever excitedly announces, “This new undefinable sound is what the industry needs; the blending of genres create good music many can relate to. Jeff, a trombonist talent like no other, has put together a sound that not only is Jazz but transcends it, opening up possibilities and opportunities for other musicians and artists. This is a must have CD.”

Bone Appétit is a two volume collection of 20 songs which can be purchased in stores or online. The entire collection is available via a 2CD set called “Double Issue.” While “Vol.1-Main Course” can be purchased on CD and digitally; “Vol.2-Deuxième Cours,” (a 7-song EP) is available only as a digital offering. Each Volume is specially priced at iTunes and Amazon and includes companion booklets. The collection features appearances from some of Bradshaw’s diverse group of musical friends such as 2X Grammy® nominees Marsha Ambrosius and Raheem DeVaughn. Grammy® winner Coko (SWV), Kindred the Family Soul, Incognito’s Maysa Leak, Grammy® nominee and Floetry alumnae Natalie “The Floacist,” musician/producer PJ Morton, rounded out by rappers TWyze and Ms. Jade.

Philadelphia born, Jeff Bradshaw is a veteran in the world of music. Jeff has played a vital role on the global R&B and neo- soul culture scene having recorded and performed with a list of world class artists including the late Michael Jackson, Jay-Z, Mary J. Blige, Kirk Franklin, John Legend, The Roots and Earth Wind and Fire to name a few. In January of 2012 while performing at the John F. Kennedy Center for the Performing Arts in Washington, D.C., the Recording Academy presented Bradshaw with eight Grammy® certificates for his work on nominated works solidifying his place as a vital force in contemporary music.

Ahead of its time, Jeff Bradshaw’s debut disc Bone Deep was released in 2003 fueled by the single “Slide” with Grammy® winner Jill Scott. Now, Bradshaw returns with a highly anticipated sophomore album Bone Appétit (April 24, 2012). Producer Vidal Davis (Justin Timberlake, Ne-Yo, Jill Scott) who contributed to nearly half the tracks on the new collection shares “Jeff is not just coming out with any album. He’s really taking the trombone to another level making it interesting, singing and playing. It has dope features and the music that he’s writing is fresh. This album…is the truth.” Others echo Davis’ sentiments. Program Director, James Lewis of WTCC-FM exclaimed “Wow!!! This CD is fire!!!!!” while Sam Fuston, Midnight Records in Los Angeles shares "This sound of music is something that the music game is in need of, Thank you for good music."

The buzz video from Bone Appétit launched last December was “Till Tomorrow” a sexy danceable track featuring R&B “love-man” Raheem DeVaughn and Philly raptress Ms. Jade. Bradshaw had a great time working with DeVaughn and Ms. Jade and believes his listeners will connect with the song saying “Bringing the three of us together for this song was like putting butter and jelly on hot biscuits.”

The second taste served from Bone Appétit is a cover of the Janet Jackson hit “Got Til It’s Gone” featuring special guests Marsha Ambrosius and Christian rapper TWyse who help Bradshaw transform the song into a tribute to the spirit of the people of New Orleans. “I was always a fan of the Janet song, and I wanted to record it because it spoke to what was happening down there” says Jeff. “I wanted to remind everyone that there is still work to be done in New Orleans. People think some years have gone by and everything is cool. But, ‘no, things are not cool!’ They are a long way from being back to normal.” VH1 Soul held the video World Premier for “Got Til It’s Gone” on Monday March 26th.

Despite the attention received by the vocal tracks and guest stars, at the core of Bone Appétit are the virtuoso performances by Bradshaw on his chosen instrument – the trombone. Covers of Tony Toni Toné’s “(Lay Your Head On My) Pillow” and Maze’s “Happy Feelin’s” are joined by the bold brass of original cuts like “N.O. Groove,” and the Go-Go fueled “Steppin’ Out featuring Brass Heaven.” As Bradshaw prepares to release these tasty treats which have been slow cooking for nearly eight years he shares “Every day I get to play my horn and share my gift with the world is always a blessed day. Putting that together with all I do, it’s time for the trombone to be out front and sexy.” Bone Appétit!

Twitter: @IamJeffBradshaw
http://www.jeffbradshaw.com/
VH1 "Got Til It's Gone Video" : http://www.google.com/url?sa=t&rct=j&q=&esrc=s&source=web...
The Jeff Bradshaw Experience: http://www.youtube.com/watch?v=A6agdvYEKGw
Posted by Jazz Chill at 9:13 AM