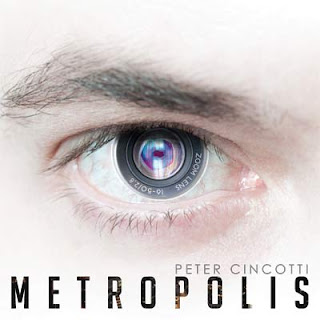 With its hard-driving beats, funky rhythms and stellar pop-centric sensibility, vocalist, pianist and composer Peter Cincotti’s fourth album, Metropolis, might be perceived as a sharp left turn from the jazz-focused, boy-crooner sound that established his career in America a decade ago. But Cincotti has been living something of a musical double life, as his last record of all original pop songs went gold in Europe, reaching the top of radio charts alongside the likes of Rihanna and Coldplay. Cincotti sees his latest release, Metropolis, as more evolutionary than revolutionary, marking his continuance along a musical path that he started mapping as early as age three.

Cincotti was just 18 when, in 2003, his eponymous debut album for Concord catapulted him to international fame. Endless comparisons were made to the singing and playing style of Harry Connick Jr. (one of Cincotti’s early mentors and strongest boosters) and Cincotti was often hailed as the post-millennial answer to Frank Sinatra. Looking back a decade, Peter recalls, “I was surrounded by a lot of people who want you to repeat things—to make the same record over and over again. [Back then] I did have a lot of idols in the Sinatra mold, and still do, but that was always just one room in the house for me. Even with the first album, my goal was to find a personal approach to the [jazz] genre. Music for me is about creating something, not repeating something.”

His second album, On The Moon, marked the very beginnings of Cincotti’s expansion beyond the jazz genre, and became a kind of bridge that lead from his first album to his third album East Of Angel Town, released by Warner Brothers Records in 2007. Produced by the legendary David Foster, East Of Angel Town redefined Cincotti overseas and yielded his last hit single “Goodbye Philadelphia”, which reached #1 on pop radio charts throughout Europe, leading to sold out tours, primetime TV performances, and unique collaborations with artists like David Guetta.

For Cincotti, Metropolis is just another step forward. Produced by John Fields (Switchfoot, Jonas Brothers) Cincotti’s fourth album examines the joys and ills of the contemporary urban experience from multiple perspectives. “The album is,” says Cincotti, “meant to be representative of how we live today. It’s not about one particular city, but the urban landscape in general. I wanted each song to feel like a neighborhood within Metropolis, and for the storylines of the songs to somehow seem as if they were occurring simultaneously.”

The album opens with its set piece, the title track, strongly reminiscent of the Pet Shop Boys’ infectiously propulsive electronica. Later tracks “Graffiti Wall,” partially inspired by the twentieth anniversary of the Berlin Wall’s demolition, and “World Gone Crazy,” with its condemnation of society’s tech-fueled ferocity, further speak to the overarching theme.

The remaining tracks focus more on personal tales within this urban jungle. “There are,” says, Cincotti, “a few songs on the album about commitment, beginning with “My Religion.” It’s polar opposite is “Forever and Always.” Both are about becoming someone else for the sake of a relationship, but the first comes from the dark side of commitment and the second from the light.”

Romantic upheaval is also prevalent. “Take a Good Look” traces a disintegrating relationship. As Cincotti explains, “The beginning of the song is a question, the middle a feeling, and the end an undeniable belief that the relationship is over.” The closing track, “Before I Go,” is also about departures but, he says, “has a sort of cockeyed optimism in it. It’s about trying to freeze that moment in time before you have to say goodbye, honestly believing you can fight the inevitable.”

But, proof that Cincotti has not entirely lost heart, there are also several songs that suggest a more upbeat attitude towards love and its possibilities. “Do or Die” tells of a guy infatuated with a workmate who is finally given his chance when he finds himself alone with her in an elevator. “It is,” says Cincotti, “all about making the first move — that ‘fight or flight’ response that sometimes goes through your head when you’re interested in someone.” Irresistible attraction is also central to “Magnetic.” “In this case,” says Cincotti with a laugh, “the guy’s excuse is that it’s pure physics: ‘don’t blame me,’ he’s saying, ‘I have no control over this.’” And “Fit You Better” is a clever tale of, as the lyric suggests, ‘perfect opposites’ whose marked differences are what make the romance work.

Though all 12 tracks demonstrate Cincotti’s skill and maturity as a songwriter, two are particular standouts. “Madeline” again concerns commitment, but with an intriguing twist. The guy in the piece is unswerving in his long-term dedication to one woman, yet realizes that a former lover will always cloud his memory. “I was interested,” says Cincotti, “in the idea of someone from the past forever tainting the present. What it may be like to move forward while accepting the fact that the rest of your life will be haunted by someone you will never have again.” And, dovetailing the through themes of modern urban life and romantic entanglements is “Nothing’s Enough.” Cincotti sees the song as “a big question mark. It concerns [societal] excess; how people my age have become accustomed to quick changes and immediate gratification on every level. The question is: How does that mindset affect modern day relationships?”

Ultimately, Cincotti would like listeners, who nowadays often approach music in terms of individual track downloads rather than complete albums, to “listen to the album as an album. I’m hoping people will press ‘pause’ on the craziness of their daily lives and actually experience the entire record. It’s a lot to ask in this day and age, but this album is all about creating another world—the [quasi-mythical] world of Metropolis — and I want them to feel like they’ve actually been there.”
Posted by Jazz Chill at 9:36 AM

Thank-you so much for posting this Blog! :D

Peter should be releasing "Do or Die" as a single. It's a great song that can be likened to Travie McCoy's "Billionaire".

"My Religion" is a good song but too ordinary and not what the market is looking for (sorry to say). The other great track is "Nothing's Enough".