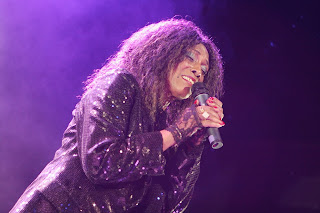 For over three decades, Gwen McCrae has been a soul and blues powerhouse singer entertaining audiences worldwide. She started out singing as a child with her mother who played piano in church. With a heartfelt phrasing for the blues and the spirit-filled sounds from her soul, Gwen has entertained audiences in countless sold-out venues and set her music in a Blues and Soul category of its own. Since the early '60s, Gwen has paid her dues, on tour with the likes of Smokey Robinson, Luther Vandross, James Brown, The Temptations, The O Jays, Spinners, James Cleveland, and many more. Gwen's entertaining has included concerts at The Apollo Theatre, Madison Square Garden, Cow Palace in LA, Disneyland, television shows such as "American Band Stand', "Soul Train', "Midnight Special', "In Concert', as well as various venues throughout the world in London, Paris, Germany, Scotland, and Venice, just to mention a few.

Gwen's hit song "Rockin' Chair" earned her a Grammy nomination, sold over 3 million records, and went to No.1 on Billboard's R&B charts. Gwen McCrae has recorded over 20 albums, with nine of her songs breaking into Billboard's "Top 100 list'. Her latest album, Gwen McCrae Sings TK, earned her "Best Blues & Soul Woman Song Of The Year Award " in 2007 for "Let's Straighten It Out," presented by Jus' Blues Music Awards Show. She was also nominated for the 2008 "Blues & Soul Woman Of The Year Award." Gwen looks forward to touring in Europe every year. Recently Gwen performed before a sold out audience in one of London's premier venues, "The London Indigo 2'.

Gwen McCrae's music career has touched the hearts of music lovers all over the world, with award winning hits in every music genre, from Blues, Soul, R&B, Funk, Disco, to Jazz. Her deep soul style singing created a music genre all her own. Gwen's music is known for its soulful sound and dance oriented beats. Loyal European music fans have in fact renamed her "The Queen of Rare Groove'. Among her European and USA hits include songs such as "All This Love That I'm Giving', Keep The Fire Burning', "Funky Sensation', "90% Of Me Is You', "Let's Straighten It Out' , "Girlfriend's Boyfriend', "Rock Your Baby', "Clean Up Women', and the list goes on.

Gwen McCrae does not just perform on stage but makes the audience feel they are part of the musical experience. In an interview Gwen stated that "The only time I'm really happy is when I'm on that stage, in front of my audience. Then, I'm the happiest woman in the world! And there is nothing that anybody can say or do to make me unhappy, because I'm doing just what the Lord wants me to do; satisfy the people. Not the people that you recorded for and all of that; Satisfy that audience, they're the ones that love you; they're the ones that buy your records.'

Gewn McCrae is scheduled to appear at the upcoming Happy Days Music Festival on June 2, in Surrey, UK, along with artists Jocelyn Brown, James D-Train Williams, and Colonel Abrams.

http://www.happydaysfestival.co.uk
Posted by Jazz Chill at 8:34 AM