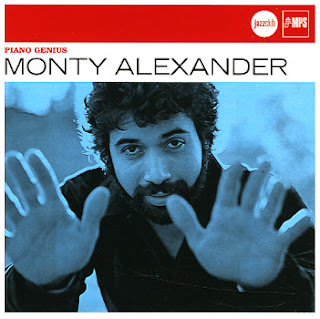 Pure genius from pianist Monty Alexander – a collection that features some of his greatest recordings for MPS! Sometimes, there's a special sort of magic that happens between a player and a label – and that's definitely what happened with Alexander at MPS Records during the 70s – a whole new level of his playing that never came out with other labels – and which, despite countless other recordings in later years, may not have ever sounded this great again! There's a sense of freedom to the MPS recordings – a unique approach to rhythm that really works well with Monty's touch on the keys – and which makes the tunes, although often just trio or quartet number, supremely groovy from the ground up. Titles include "So What", "Theme From Shaft", "Montevideo", "Brown Skin Girl", "We've Only Just Begun", "You Are The Sunshine Of My Life", "Here Comes The Sun", and "Theme From Love Story". ~ Dusty Groove 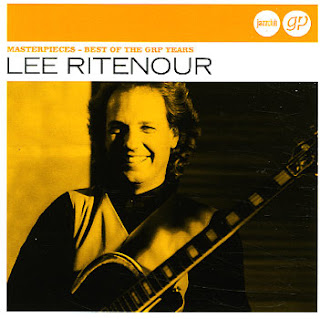 LEE RITENOUR - MASTERPIECES: THE BEST OF THE GRP YEARS
Sweet grooves from Lee Ritenour – a collection of the guitarist's classic recordings for the GRP label! Lee was one of the key talents who helped forge the GRP sound right from the start – that great blend of soulful and smooth that went onto have an impact on jazz for generations to come – but which is often heard best in the hands of a founder like this! Ritenour's got a great sense of space and timing, which usually keeps things far from the smooth jazz cliches that often hold back other players. There's great keyboards on many numbers – played by Bob James, Dave Grusin, and others – and titles include "Rio Funk", "13", "Butterfly", "St Bart's", "Water To Drink", "Boss City", "78th & 3rd", "Mizrab", and "Children's Games".
~ Dusty Groove 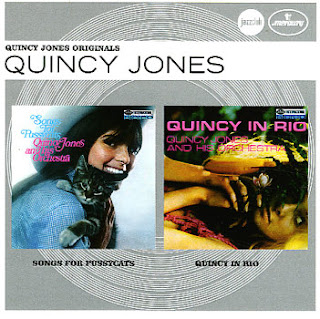 QUINCY JONES - SONGS FOR PUSSYCATS / QUINCY IN RIO
An unusual package of Quincy Jones albums – featuring variations on two American records, presented here in offbeat German versions of the 60s! First up is Songs For Pussycats, kind of a mix of Quincy Jones' Pussycat album for Mercury with some tracks from other records too – all done in that wicked mix of jazz, soundtrack, and popular themes that Quincy virtually helped invent back in the 60s! The album's got plenty of great groovers that take a popular tune and kind of turn it on its ear – takes on tracks like "What's New Pussycat", "Take Five", "Mack The Knife", "Sermonette", "Mr Lucky", and "Cast Your Fate To The Wind" – all of which are souped-up by Quincy, and done in a rhythmic style that takes them past familiar versions you might know. Quincy In Rio is a set that seems to be the famous Big Band Bossa Nova album at the start, but which also features tracks from other 60s albums too – showing a whole new fresh side to Quincy's genius in a jazz bossa mode! Arrangements are very lively, with lots of great percussion underneath the soaring big band charts – and titles include "Bossa Nova USA", "Desafinado", "Jive Samba", "Baia", "The Gentle Rain", "Non-Stop To Brazil", "Samba De Una Nota So", and "I Love You & Don't Forget It". ~ Dusty Groove
Posted by Jazz Chill at 8:14 AM