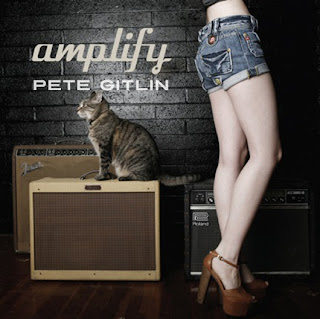 Coming Together Records has announced Amplify, the second release from Phoenix-based guitarist and composer Pete Gitlin. Following up on Full Circle and the Great Temptation, and its #1 hit "Sunshine Days", Amplify stakes out new ground in the alternative jazz genre. Early previews of the CD describe it as "the Sgt. Pepper of smooth jazz", in that each of the ten tracks are very different, and yet they hang together as an inspiring and uplifting work.

Far from playing it safe, Gitlin and his producer, John Herrera, from the legendary Arizona fusion band Turning Point, have crafted a dizzying array of styles and songs, from the pure smooth jazz of the joyous single "Lucky in Love", to the neo-soul of "Soul Connection", to the raunchy beat of "Reggaetown", to the country/jazz feel of "Cowboys and Indians", to the Philly-soul sound of "Until the Morning Comes". A truly unique work, with production and excitement rare in the smooth jazz genre.

Pete Gitlin is a guitar player, bassist and composer who is creating a new kind of jazz…part smooth, part contemporary, part funk, part rock…call it alt jazz. With such varied influences as Pat Metheny and Miles Davis, Lee Ritenour and Larry Carlton, the Beatles and Steely Dan, Pete looks beyond the labels attached to musical styles while searching for the passion and melody behind his own unique music. Having played in rock, fusion, and funk bands in his teens and twenties, Pete took a break from his musical career to raise his family, achieving high levels of success in the technology world as a Vice President at a Fortune 500 company.

But in April of 2007 he decided to take the plunge and devote 100% of his time to writing and performing. Through a series of magical events he met drummer and producer John Herrera from the legendary Phoenix band Turning Point. John heard the potential in Pete’s music, and a collaborative effort began. The result of this partnership is Full Circle and the Great Temptation – featuring Pete’s stellar guitar work ably supported by respected jazz musicians Jeff Kashiwa from the Grammy award-winning smooth jazz band The Rippingtons on sax, Mel Brown (Wayman Tisdale and Eric Darius) on bass, Michael Broening (Grammy award winner with George Benson and Al Jarreau) on keyboards, Dominic Amato on sax, and of course John Herrera on drums and percussion.

Also participating in the project are vocalist and pianist Rachel Eckroth on the adult contemporary radio ready “Golden Love Light” and vocalist Jodi Light on the smooth and refreshing “Sunshine Days”, as well as pedal steel guitar maestro Mike Smith on the brilliant “Sunrise”.

http://www.petegitlin.com/
Posted by Jazz Chill at 8:20 AM