LEGACY: THE BEST OF TAB BENOIT 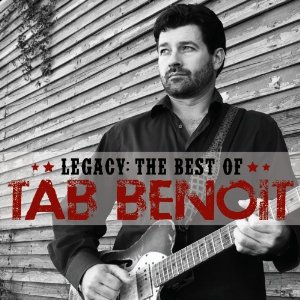 In a career of more than two decades, blues guitarist/vocalist Tab Benoit has generated an impressive body of work — every note of it rooted in the rich and centuries-old musical and cultural traditions of his native Louisiana. While his earliest recordings and performances may have established him as a genuine blues musician, his ever-expanding body of work has become even more resonant in the years since Hurricane Katrina and its devastating aftermath in 2005. Through his environmental advocacy work with Voice of the Wetlands — which actually predates Katrina by a few years — Benoit has counterbalanced his musical career with a tireless commitment to protecting the precarious landscape of his home state.


This fierce commitment to creative and environmental ideals comes to the forefront in a compilation of recordings from Benoit’s years, so far, on the Telarc label. Legacy: The Best of Tab Benoit gathers 14 tracks that mark some of the high points in the career of an artist who has been aptly described as “the new kid from the old school.” Legacy is set for release on Telarc, a division of Concord Music Group.

“Benoit is a true Louisiana resource, the product of a life steeped in music — blues, country, Cajun, rock and soul,” according to the liner notes by John Swenson, author of New Atlantis: Musicians Battle for the Survival of New Orleans. “Tab brings all these elements to bear in a style uniquely his own, a delivery built around one of the greatest voices of his generation and powered by an exciting guitar sound. Benoit stands out as a blues player because he never, ever overplays, making every note count the way greats like Albert King and Johnny Copeland could do it. Benoit is also a fine songwriter whose heart shines through his work and who conveys an earnest message in every story he tells.”

All of these virtues are apparent throughout Legacy, which opens with the potent “Shelter Me,” a Buddy Miller song about overcoming adversity. Benoit’s version, from his 2007 album Power of the Pontchartrain, was produced by David Z (Prince, Jonny Lang, Buddy Guy), who thought it carried the appropriate message for a post-Katrina album.

“[David] had worked with me before Katrina when I told him what Voice of the Wetlands was about,” says Benoit. “I described what was going on with the wetlands and what the problems were. I’d been trying to warn people about what would happen. And then it happened. Of course there’s frustration and all kinds of other emotional things. We’ve worked enough together that he knows I’m still optimistic. I don’t give up the fight. I think a lot of that is in that song.”

The foot-stomping next track, “Night Train,” comes from Benoit’s 2005 release, Fever for the Bayou. “It was one of those songs that kind of writes itself,” says Benoit. “I’d just driven home from Chicago or someplace. I drove straight through, about 20 hours. It’s like being on a night train going all night and trying to get home.”

Throughout the collection, Benoit is joined by other luminary bluesmen with whom he has collaborated during the past 13 years. Among them are guitarists Kenny Neal (“I Put a Spell on You”) and Jimmy Thackery (“Nice and Warm,” “Whiskey Store”), vocalist Billy Joe Shaver and fiddler Wayne Thibodeaux (“Comin’ on Strong”), vocalist/percussionist Cyril Neville (“The Blues Is Here To Stay”) and harpist Jimmy Hall (the live “New Orleans Ladies,” featuring Louisiana’s LeRoux).

The album closes with “Bayou Boogie,” a wild jam taken from Whiskey Store Live, Benoit’s 2004 recording with Thackery (and the follow-up to the 2002 Benoit-Thackery studio project, Whiskey Store). Also on hand for this balls-out free-for-all are saxophonist Jimmy Carpenter, Ken Faltinson on Hammond B-3, bassist Carl Dufrene, and dual drummers Darryl White and Mark Stutso.

The fact is, “it’s always a lot of fun when Tab comes to play,” says Swenson. “Legacy: The Best of Tab Benoit allows his fans to share in that fun back at home.”

Concord Music Group
Posted by Jazz Chill at 10:12 AM