It's 2011 and Michael Bublé fans are still insane for Crazy Love. Following a run of critically acclaimed sold out shows around the world, the Canadian superstar has added 16 additional shows of "The Crazy Love Tour," it was announced today by the tour's national promoter Beaver Productions. Beginning with a June 1st date in Austin, Texas, the tour continues through Memphis, Milwaukee, Des Moines and several other markets. A full itinerary appears below. "A performer in peak form. You are witnessing one of the greats," raved the Orange County Register upon reviewing the "Crazy Love" show. Tickets are expected to go on sale for most dates in late March. In other Bublé news, "Hold On," the third single from Bublé's multi-platinum Grammy nominated Reprise Records Crazy Love CD will be released on February 8th. It follows the mad popularity of his back to back smash singles "Haven't Met You Yet" and "Hollywood" -- both written by Bublé. The Grammy nominated Crazy Love CD was recently re-released in a deluxe 2-CD package Crazy Love Hollywood Edition that includes eight additional tracks and became a global holiday best seller. Worldwide sales for Crazy Love CDs have now surpassed 7 million units! Overall sales of Michael Bublé since his debut CD are over 30 million. Prior to the next leg of the tour, Bublé will be co-hosting "Live with Regis & Kelly" on March 18th. Bublé has recently teamed up with Beringer Vineyards who are the official wine sponsor of "The Crazy Love Tour." 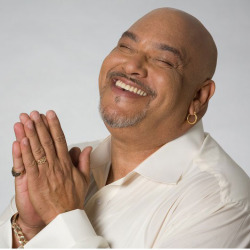 Smooth Jazz New York kicks off Valentine’s weekend with A Valentine’s Cruise with Phil Perry featuring two special sailings and performances on February 11, 2011. With Phil Perry’s rich and tender jazz sounds resonating against breathtaking skyline views of Manhattan, guests can start their weekend of romance as they sail aboard The Spirit of New York departing Pier 61 at the Chelsea Piers at 6:30pm for a sunset/evening cruise or at 9:30pm for a moonlight cruise. Board the luxurious Spirit of New York cruise ship for a two-hour celebration of love and enjoy smooth jazz sounds aptly accompanied by unobstructed views of the world’s premier skyline under under romantic moonlit skies. “With Valentine’s Day falling on a Monday, we wanted to do something special to set a romantic tone for the entire weekend… when people can take the time to kick back and celebrate without having to go to work the next day,” says Sam Kimball, Smooth Jazz New York co-founder. “Phil Perry was absolutely the artist of choice, for his repertoire of love songs, sensuous grooves, and passionate R&B melodies,” Kimball adds

Perry first came to the attention of soul music fans as the lead singer of the Montclairs in the early 1970s, He has released 10 solo albums over the last two decades; most recently his Christmas 2009 CD entitled “The Gift of Love.” A well respected singer-songwriter, his songs have been performed by such notable performers as Aretha Franklin, Patti Austin, Bobby Caldwell, and Lee Ritenour, among others. As one of the most sought-after background vocalists in the music business, Perry’s warm, rich tones can be heard on the recordings of top artists including Bill Withers, George Duke, Barbara Streisand, Johnny Mathis, Anita Baker, Boz Scaggs, Rod Stewart, Peabo Bryson, and Chaka Khan.

Tickets for these two special Valentine’s cruises are $59.50 per person now through February 10, 2011 and $69.50 per person on the day of the cruise. Smooth Cruise tickets include world-renowned jazz entertainment and a two-hour cruise. Advance purchase is highly recommended. Optional buffet dinner and beverages are available for an additional fee and may be purchased on-board or in advance at the time tickets are ordered. For more details about the A Valentine’s Cruise with Phil Perry or to purchase tickets, visit http://www.smoothjazznewyork.com/ or http://spiritofnewyork.com/New-York/smooth-cruises http://www.spiritofnewyork.com/New-York/smooth-cruises, or order by phone at (866) 211-3812.

Smooth Jazz New York is a subsidiary of Marquee Concerts, producers of the CD101.9 Smooth Cruises for the last 12 years. With CD101.9 off the air, enthusiasts of this genre of music have come to rely on Smooth Jazz New York to fill the void. The organization produces and promotes New York's biggest and best Smooth Jazz shows and serves as the portal for live jazz shows in the New York Metropolitan area. Learn more at http://www.smoothjazznewyork.c/om.
Posted by Jazz Chill at 10:37 PM No comments: 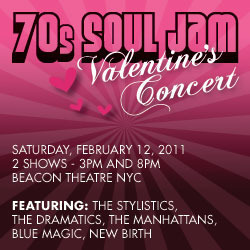 This Valentine's weekend Marquee Concerts, the nation's leading promoter of jazz, soul, and R&B musicians, reunites some of the hottest super-groups for its "70's Soul Jam Valentine's Concert" on February 12, 2011 at the Beacon Theatre. Fans of "Soul Train" and the sensational sounds of the '70s won't want to miss this one-time event featuring two shows at 3pm and 8pm. The LA Music Examiner described the re-emergence of Soul/R&B groups as "evenings packed with much-loved hits that get the crowd moving" and the audience "singing along to every word." "The "70's Soul Jam Valentine's Concert" brings together some of the greatest musicians of the period," notes Sam Kimball, co-founder of Marquee Concerts. "For fans who first fell in love listening to these Soul hits, this will be an unforgettable, once-in-a-lifetime show."

The concert will kick off with Philly soul group THE STYLISTICS, who spun out 12 straight Top Ten hits that included "You Are Everything," "Betcha by Golly, Wow," "I'm Stone in Love With You," "Break Up to Make Up" and "You Make Me Feel Brand New." These crowd-pleasing ballads feature the extraordinary falsetto of Russell Thompkins, Jr.

Detroit-based THE DRAMATICS are best known for their R&B hit "Watcha See Is Watcha Get." The single was the Dramatics' first major national hit, peaking at number three on the R&B charts. The following year their single "In the Rain" shot to the number one spot on the R&B charts.

Jersey City standouts, THE MANHATTANS, sold millions of records over four decades. They won NAFTA's "Most Promising Group" in 1969, and in the late 1970's recorded and released the songs they are best known for, "Kiss and Say Goodbye" and "Shining Star."

"The Manhattans were one of those classic R&B vocal groups who managed to achieve incredible career longevity by adapting their style to fit changing times," writes Steve Huey, Rovi. "Formed in the '60s as a doo wop-influenced R&B quintet, the Manhattans reinvented themselves as sweet, smooth soul balladeers during the '70s."

The "70's Soul Jam Valentine's Concert" also features Philly R&B quintet BLUE MAGIC, who hit the Top 40 of the R&B singles chart with their first three 45s before crossing over with "Sideshow," which went gold, topped the R&B charts, and became a Top Ten pop hit. Their next single, "Three Ring Circus" made the R&B Top Ten and the pop Top 40. Known for their smooth ballads, the group stayed high on the Soul charts with "Stop to Start" and "Chasing Rainbows" before landing a big hit with the dance tune "Magic of the Blue."

Rounding out this impressive bill of artists, Motown favorite NEW BIRTH has its roots in the music of gospel singers Leslie and Melvin Wilson. Their hits include the R&B Top Ten single "I Can Understand It," "It's Been a Long Time," "Wildflower," and R&B hit, "Dream Merchant." New Birth was originally named the NITE-LITERS and had chart action with R&B hits: "K-Jee," "Afro-Strut," and "Pull Together."