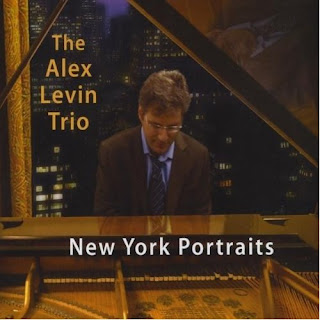 Originally from Philadelphia, Alex Levin has performed in Philadelphia and New York as a leader and a sideman for almost two decades. After studying at The New School with teacher Gary Dial, he transferred and graduated from Brown University in 1998 with a degree in English Literature. From 1998-2001 he lived in Berlin, Germany, where he started his first quartet, The Living Room. The popular band played at numerous clubs and festivals throughout Germany, and gained notoriety for unique interpretations of pop songs by the likes of Bjork and Tom Waits.

Alex has played with multiple vocalists and instrumentalists since returning to New York in 2001. He has appeared at countless upscale venues throughout the city. On occasion, you can also find Alex and his trio performing at smaller jazz clubs in the village and Brooklyn. He has composed numerous pieces, and has arranged music for top vocalists, including the brilliant Paulette McWilliams.

Alex released his first CD of trio music, Night and Distance, in April of 2005. His first run of his CDs sold out within eight months of its release. In October, 2006, he released his second CD, A Reason for Being Alone featuring his own compositions and an expanded lineup of musicians, including saxophonists Stacy
Dillard and Max Hacker, and cellist William Martina. His composition "Your Call" was heard in the 2005 film "Parkstories.” In addition, "New Schooled" has been licensed by MTV, and "Emma's Ennui" from the same CD has been downloaded 8540 times at All About Jazz.com. Levin’s jazz writing has been published in The Saint Ann’s Review. In the summer of 2006, Alex was invited to play as part of the Jazz Composer's Forum in Asheville, North Carolina, where he presented a special concert of original music.

In 2008, Alex’s trio was invited to be the artist in residence at Middlebury College’s Bread Loaf School of English. Since then, he has been playing weekly gigs at Manhattan Youth Downtown Community Center in Tribecca, where he and his trio perform all-ages shows every Friday evening to a loyal audience ranging in age from 1-80. Originally the band was hired for a month-long residency at the Community Center, but that contract was extended and continues to this day. Always eager to pass along the jazz tradition, Alex invites
students under 16 to sit in with the band for a song or two. Besides his gigs at the Community Center, Alex performs regular gigs as a sideman with vocalist Chris Staffel at Bistro Citron on the Upper West Side, and at Abigail's in Brooklyn as an accompanist to saxophonist Tina Richarson.

Review by Susan Francis / JazzTimes
Standards like George and Ira Gershwin's "I Loves You Porgy" and Lorenz Hart and Richard Rogers' classic tune "My Heart Stood Still" are garnished with a modern flare in the hands of pianist Alex Levin. Levin's trio comprising of bassist Michael Bates and drummer Brain Floody grazes the stars of jazz music's yesteryear on the group's latest recording New York Portraits, which additionally features two original tracks written by Levin. Pensive and penetrative, New York Portraits is driven by the winds of showtunes style harmonies and swing-inspired melodies. The tracks elevate the spirit with each one displaying Levin's keen melodic sensibilities and the trio's ability to fuse their ideas into a striking mix.

The title of the album, New York Portraits, refers to the theme resonating through the recording as Levin uts together a collection of songs that are descriptive to him of New York City including his original contributions, the cushiony gospel tones of "Last Train To Brooklyn" and the jitter-fused swing palpitations of "Blues For Charley." Levin's strokes are elegantly hewn and the trio's interlocking verses exude a sophistication reminiscent of Nat King Cole. The group's renditions of the Gershwin's "Isn't It A Pity?" and Irving Berlin's "Cheek To Cheek" are checklist perfect, and the musicians own improvised add ons like Bates' whirling arcos in "My Heart Stood Still" and Levin's wiggling keys glittering along "Who Can I Turn To" produce a sleek ruffling. The somber coloring of "Body And Soul" closes out the album with a vision of the city winding down and its inhabitants having a last dance before turning down the lights.

In many ways, New York Portraits seems like Levin's dream of what the music played in the swing clubs around New York City during the '40s, '50s, and '60s must have sounded like. The melodies live in two worlds, the past and the present. The songs are steep in nostalgia in their phrasing but the tones and the improvised lines are purely contemporary. New York Portraits is a vital asset to jazz music's gallery. It bridges two worlds that are far apart and yet enjoy each other's company, at least the way Levin's trio presents it.
Posted by Jazz Chill at 11:13 AM