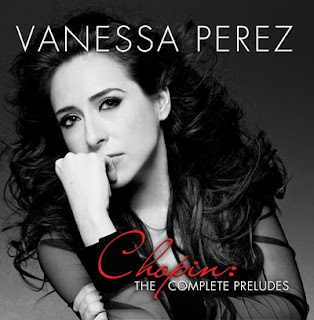 Venezuelan-American pianist Vanessa Perez will make her Telarc International debut when the label releases her all-Chopin collection, including the 24 Preludes Op. 28, in April in Europe and May in the U.S. Perez is a product of the same energized musical culture in Venezuela that produced such international stars as conductor Gustavo Dudamel and pianist Gabriela Montero. Praised for a bold, passionate performing style allied to musicianship of keen sensitivity, Perez has been championed by the most iconic of performers. Conductor Zubin Mehta said of the pianist: “Her level of musical perception and artistic awareness impressed me as much as her total command of the keyboard.” And the legendary pianist Claudio Arrau was touched by her playing, describing Perez as “a pianist whose technique, musicality, and intelligent approach to the music she plays made a profound impression on me.”

Perez’s influences in Chopin’s 24 Preludes range from “the poetry and grandeur” of Arrau’s Philips recordings – “the way he would sing the melodies on the piano,” she says – to “the energy and intensity” of another hero, Martha Argerich, “always a huge inspiration” to her. Yet Perez has made the music of the 24 Preludes – as well as the Fantasie in F minor Op. 49, Barcarolle Op. 60 and two Preludes from Op. 25 – very much her own on the album. “The way I play this music may not be stereotypically `beautiful’ – it may be more raw than some,” she says. “But I wanted the music to sound organic and real, above all. I didn’t want pretty. I wanted honest.”

Celebrating the release of her Telarc debut, Perez will perform a recital on May 31 at the Americas Society in New York City, with the program including Chopin’s 24 Preludes. Prior to the New York event, she will perform a recital in Milan on April 12, the day of the CD’s release in Europe. Perez has an international profile, with the pianist having played prestigious venues across the United States, Latin America and Europe. She has performed not only with Dudamel and Montero (a close friend since childhood), but also with such top musicians as pianist Ingrid Fliter, cellist Jan Vogler, violinist Colin Jacobsen and conductors John Axelrod, Enrique Batiz, David Gimenez Carreras, Karel Mark Chichon and Diego Matheuz. Reviewing a Perez performance of Mozart’s D Minor Concerto in Germany, the Dortmunder Zeitung called her “a virtuosa wild at heart and with a gentle touch,” combining “spontaneous freshness and poetic expression.” The Miami Herald, witnessing Perez in Rachmaninoff’s Piano Concerto No. 2, marveled at her “youthful fire” and “rapt lyricism.”

Reviewing a solo recital, the Washington Post said: “Vanessa Perez is not to be taken lightly. She stormed through some beautiful works at the Venezuelan Embassy, her fiery impetuosity proving her technical prowess in works by Villa-Lobos, Albéniz, Ravel and Rachmaninoff. Even Mozart's Sonata in F, K. 332, had muscular energy as she raced through the Allegros. The Adagio was pure grace.” A critic for the Connecticut Post was enraptured by Beethoven playing that was “not only crystalline. . . but overflowing with emotion,” while El Clarin of Buenos Aires said that just “to watch Perez play is an amazing show itself.” And reviewing a performance of Chopin’s Fantasie in F minor – one of the new album’s highlights – Messagero Veneto of Italy praised Perez’s “diamond touch, never lacking full expression and feeling.”

Chopin is some of the music “closest to my heart,” Perez says. “I listened to my mother play Chopin on the piano when I was a child. And my grandmother, who lived in Argentina for years, would always tell me about how she used to listen to a neighbor play Chopin’s 24 Preludes all day next door. Her favorite was the last one, in D minor, which is one of my favorites, too. Each of the 24 Preludes may be brief, but they are powerful – each one a whole world of feeling, highly condensed. The way Chopin speaks through the piano is very intimate, very passionate.” The recording sessions at Patrych Sound Studios in the Bronx “felt like a live concert at times, with friends there in the studio,” Perez recalls. “But then I don’t have a separate `concert mode’ and `studio mode.’ Even in the recording studio, I’m performing, period.”

Perez has had other high-profile experiences in the studio. Joining superstar violinist Joshua Bell, she recorded Astor Piazzolla’s Oblivion for Bell’s At Home with Friends album, released by Sony Classical in 2009. She also teamed with Jan Vogler to duet on Piazzolla’s Le Grand Tango and other pieces for the cellist’s 2008 Sony Classical album, Tango. Under her own name, the pianist’s new Chopin collection follows her 2005 solo album for VAI that featured Chopin’s four Ballades, pieces from Albéniz’s Ibería and a work by contemporary composer Suzanne Farrin. Reviewing that album, International Piano magazine said: “Perez can hold her head up high in the most distinguished company in Chopin’s Ballades. If anything, her Albéniz is even more impressive – impassioned, rich-toned and seductively coquettish where appropriate.” Chiming in with its acclaim, the American Record Guide called Perez a “spirited, hot-blooded pianist. . . Her wide-ranging expression can go inward, and she can unleash a torrent of passion.”

Born in Miami, Perez was raised to age 11 in Venezuela, where she began her studies with Luminita Duca. In the U.S., she studied with noted Claudio Arrau pupils Ena Bronstein and Rosalina Sackstein; at 17, she won a full scholarship for London’s Royal Academy of Music to study with Christopher Elton. She continued her studies with pianists Lazar Berman and Franco Scala in Italy at the renowned Accademia Pianistica Incontri Col Maestro in Imola; she then completed post-graduate studies with Peter Frankl at Yale University and pianist Daniel Epstein in New York City. Perez made her Carnegie Hall debut in 2004, but her first performance in New York wasn’t in an uptown classical concert hall – it was at the downtown jazz shrine of the Blue Note, where Latin jazz star Arturo Sandoval had her perform his Sureña, a piece laced with Venezuelan folk melodies. A dual citizen of the U.S. and Venezuela, she currently resides just outside Manhattan, in New Jersey.

Recalling her myriad musical experiences, Perez comes back to Arrau as a catalyst. “Meeting Arrau when I was 14 changed me – he was so humble, and his encouragement gave me so much strength when things became difficult, as they do,” she says. “Some of his best advice wasn’t about playing the piano, per se. He took my hand and said, `You must learn about everything, not just music – live life to the fullest, all aspects of it. Only then will life come through your playing.’ I have always taken this to heart.”
Posted by Jazz Chill at 11:10 AM